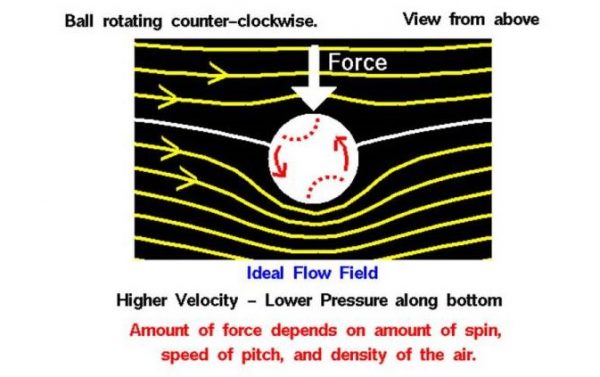 All that is necessary to create lift is to turn a flow of air. The airfoil of a wing turns a flow, but so does a spinning ball. The exact details are fairly complex and are given on a separate slide. Summarizing the results, the amount of force generated by a spinning ball depends on the amount of spin, the velocity of the ball, the size of the ball, and the density of the fluid.

Guide to Investigate the Flow around a Spinning Ball:

The left window shows a view of a ball placed in a flow of air. The ball is a foot in diameter and it is moving 100 miles an hour. You can spin the ball by using the slider below the view window or by backspacing over the input box, typing in your new value and hitting the Enter key on the keyboard. On the right is a graph of the lift versus spin. The red dot shows your conditions. Below the graph is the numerical value of the lift. You can display either the lift value (in English or Metric units) or the lift coefficient by using the choice buttons surrounding the output box. Click on the choice button and select from the drop-menu.

Be particularly aware of the simplifying assumptions that have gone into this analysis. The type of flow field shown in the figure is called an ideal flow field. We have produced the ideal flow field by superimposing the flow field from an ideal vortex centered on the ball with a uniform free stream flow. There is no viscosity in this model, no boundary layer on the ball, even though viscosity is the real origin of the circulating flow! In reality, the flow around a spinning ball is very complex because of the boundary layer growth and transition. In addition, the flow off the rear of the ball is normally separated and can even be unsteady. BUT, the simplified model helps us to determine the important parameters and the dependence of the lift force on the value of the parameters. To obtain an accurate value for the force, engineers typically use a lift coefficient that is determined experimentally and accounts for the details that are too complex to model in the analysis.