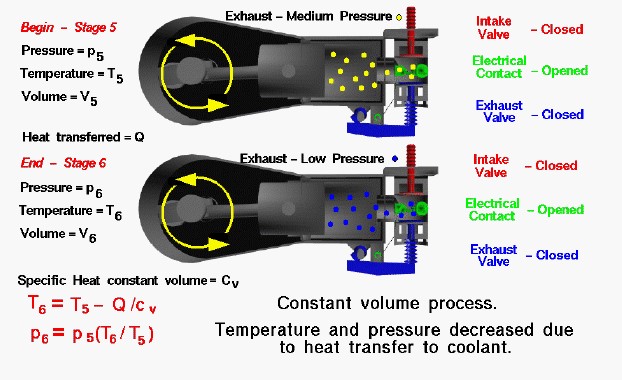 At the end of the power stroke the exhaust has been expanded into the cylinder to a moderate pressure and temperature by the motion of the piston to the left. From our considerations of the engine cycle, we designate this condition as Stage 5 of the Otto cycle. The intake valve and exhaust valve are closed and the electrical contact is open. The exhaust has done work on the piston but there is some residual heat in the exhaust gas. As the piston comes to a halt near the crankshaft, the residual heat is quickly transferred to the water in the water jacket surrounding the cylinder. In theory, the transfer proceeds so quickly that we can consider the piston to be motionless and the volume of the combustion chamber and cylinder to be a constant. The end of the heat rejection process is designated Stage 6 of the engine cycle and is the beginning of the exhaust stroke.

where Q is the heat rejected, T is the temperature, and cv is the specific heat at constant volume, From the equation of state, we know that:

where p is the pressure. The numbers indicate the two stages of the cycle. Since Q is a positive number, T6 is less than T5 and p6 is less than p5. Temperature and pressure in the cylinder both decrease during the cooling process. The final value of the pressure is atmospheric pressure and this determines the amount of heat that is rejected. In theory, the heat transfer takes place instantaneously when the piston is motionless. In reality, the heat is transferred throughout the exhaust stroke. The effect is the same, but reality is so much harder to analyze that we make the assumption of instantaneous heat release to obtain an initial estimate of the heat transferred.