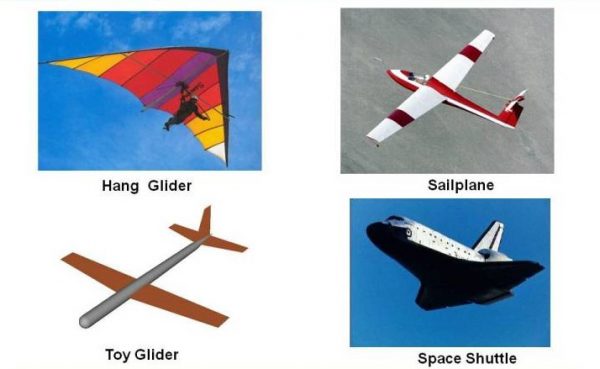 What is a glider?

A glider is a special kind of aircraft that has no engine. There are many different types of gliders. Paper airplanes are the simplest gliders to build and fly. Balsa wood or Styrofoam toy gliders are an inexpensive vehicle for students to have fun while learning the basics of aerodynamics. Hang-gliders are piloted aircraft having cloth wings and minimal structure. Some hang-gliders look like piloted kites, while others resemble maneuverable parachutes. Sailplanes are piloted gliders that have standard aircraft parts, construction, and flight control systems, but no engine. The Space Shuttle returns to earth as a glider; the rocket engines are used only during liftoff. Even the Wright Brothers gained piloting experience through a series of glider flights from 1900 to 1903.

So how does a glider generate the velocity needed for flight?

For paper airplanes and balsa gliders, the aircraft is given an initial velocity by throwing the aircraft. Some larger balsa gliders employ a catapult made from rubber bands and a tow line to provide velocity and some initial altitude. Hang-glider pilots often run and jump off the side of a hill or cliff to get going. Some hang-gliders and most sailplanes are towed aloft by a powered aircraft and then cut loose to begin the glide.

How do gliders stay aloft for hours if they constantly descend?

The answer is that they are designed to be very efficient, to descend very slowly. If the pilot can locate a pocket of air that is rising faster than the glider is descending, the glider can actually gain altitude, increasing its potential energy. Pockets of rising air are called updrafts. Updrafts are found when a wind blowing at a hill or mountain has to rise to climb over it. Updrafts can also be found over dark land masses that absorb heat from the sun. The heat from the ground warms the surrounding air, which causes the air to rise. Rising pockets of hot air are called thermals. Large gliding birds, such as owls and hawks, are often seen circling inside a thermal to gain altitude without flapping their wings. Gliders do exactly the same thing.