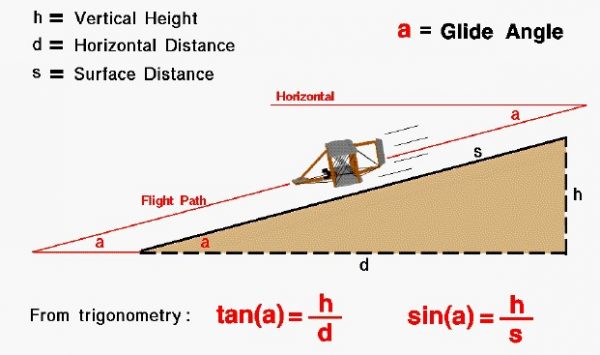 A glider is a special kind of aircraft that has no engine. Paper airplanes are the most obvious example, but gliders come in a wide range of shapes and sizes. Toy gliders, made of balsa wood or styrofoam, are an excellent way for students to study the basics of aerodynamics. The Wright brothers perfected the design of the first airplane and gained piloting experience through a series of glider flights between 1900 and 1902. These aircraft were similar to modern hang-gliders and were launched by running down the side of a sand dune at Kitty Hawk.

If a glider is in a steady (constant velocity and no acceleration) descent, it loses altitude as it travels. The glider’s flight path is a simple straight line, shown as the inclined red line in the figure. The flight path is inclined to the horizontal at an angle “a” called the glide angle. On another page we will show that the glide angle is related to the ratio of the drag and the lift of the aircraft. The brothers used this knowledge to determine the aerodynamic performance of their gliders. Determining the glide angle in flight is very difficult, so the brothers would fly their glider at a fixed height above the surface of the sand dune. In this flight condition, the flight path is parallel to the surface of the hill and the glide angle is equal to the slope of the hill.

This equation can be solved for the height of the hill. The tangent (tan) of the glide angle (a) is equal to the change in vertical height (h) divided by the horizontal distance (d) flown.