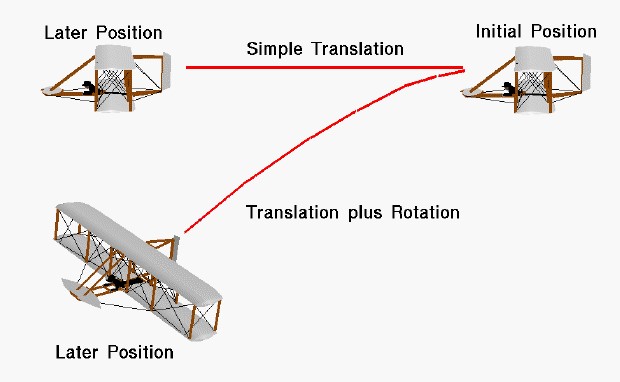 We live in a world that is defined by three spatial dimensions and one time dimension. Objects move within this domain in two ways. An object translates, or changes location, from one point to another. And an object rotates, or changes its attitude. In general, the motion of any object involves both translation and rotation. The translations are in direct response to external forces. The rotations are in direct response to external torques or moments (twisting forces).

The motion of an aircraft is particularly complex because the rotations and translations are coupled together; a rotation affects the magnitude and direction of the forces which affect translations. To understand and describe the motion of an aircraft, we usually try to break down the complex problem into a series of easier problems. We can, for instance, assume that the aircraft translates from one point to another as if all the mass of the aircraft were collected into a single point called the center of gravity. We can describe the motion of the center of gravity by using Newton’s laws of motion. There are four forces acting on the aircraft; the lift, drag, thrust, and weight. Depending on the relative magnitudes and directions of these forces, the aircraft will climb (increase in altitude), dive (decrease in altitude), or bank (roll to one side). The magnitude of the aerodynamic forces depends on the attitude of the aircraft during the translations. The attitude depends on the rotations about the center of gravity when the aircraft is trimmed.