There are many different types of glider aircraft. Paper airplanes are the simplest aircraft to build and fly, and students can learn the basics of aircraft motion by flying paper airplanes. Toy gliders, made of balsa wood or Styrofoam, are an inexpensive way for students to have fun while learning the basics of aerodynamics. Hang-gliders are piloted aircraft that are launched by leaping off the side of a hill or by being towed aloft. Piloted gliders are launched by ground based catapults, or are towed aloft by a powered aircraft then cut free to glide for hours over many miles. The Wright Brothers perfected the design of the first airplane and gained piloting experience through a series of glider flights from 1900 to 1903. The Space Shuttle flies as a glider during reentry and landing; the rocket engines are used only during liftoff.

It is important to note that building and flying a glider is not only educational, it is fun. Groups of students can work together with a teacher to learn the fundamentals. In the figure at the top of this page, we show teachers and students from two different schools involved in glider activities. The bottom two photos come from Paulo Oemig of Zia Middle School in Las Cruces, New Mexico. The top two photos are from Casey Teliczan of the Rockford Public School District in Rockford, Michigan. Mr. Teliczan’s activities are part of the Rockford Community Services after-school enrichment program.

The student photos detail the design and flight test of Styrofoam and balsa toy gliders. At the bottom left, students are producing Styrofoam wings from a Pitsco wing cutter. students choose or design an airfoil shape that is affixed to a block of Styrofoam. The wing cutter then produces an aircraft wing with the desired airfoil shape. The photo at the upper left shows the finished wing and the balsa fuselage and tail to which the wing is attached. A finished glider is shown at the upper right. And the students experience the fun of flying in the lower right picture. Here is an additional picture of the student activities. 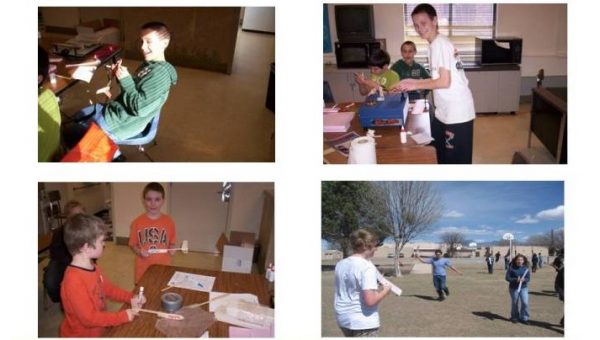