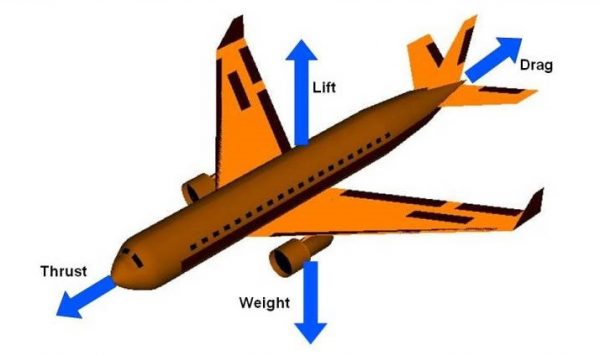 A force may be thought of as a push or pull in a specific direction. A force is a vector quantity so a force has both a magnitude and a direction. When describing forces, we have to specify both the magnitude and the direction. This slide shows the forces that act on an airplane in flight.

Flying encompasses two major problems; overcoming the weight of an object by some opposing force, and controlling the object in flight. Both of these problems are related to the object’s weight and the location of the center of gravity. During a flight, an airplane’s weight constantly changes as the aircraft consumes fuel. The distribution of the weight and the center of gravity also changes. So the pilot must constantly adjust the controls to keep the airplane balanced, or trimmed.

To overcome the weight force, airplanes generate an opposing force called lift. Lift is generated by the motion of the airplane through the air and is an aerodynamic force. “Aero” stands for the air, and “dynamic” denotes motion. Lift is directed perpendicular to the flight direction. The magnitude of the lift depends on several factors including the shape, size, and velocity of the aircraft. As with weight, each part of the aircraft contributes to the aircraft lift force. Most of the lift is generated by the wings. Aircraft lift acts through a single point called the center of pressure. The center of pressure is defined just like the center of gravity, but using the pressure distribution around the body instead of the weight distribution.

The distribution of lift around the aircraft is important for solving the control problem. Aerodynamic surfaces are used to control the aircraft in roll, pitch, and yaw.

To overcome drag, airplanes use a propulsion system to generate a force called thrust. The direction of the thrust force depends on how the engines are attached to the aircraft. In the figure shown above, two turbine engines are located under the wings, parallel to the body, with thrust acting along the body centerline. On some aircraft, such as the Harrier, the thrust direction can be varied to help the airplane take off in a very short distance. The magnitude of the thrust depends on many factors associated with the propulsion system including the type of engine, the number of engines, and the throttle setting.

For jet engines, it is often confusing to remember that aircraft thrust is a reaction to the hot gas rushing out of the nozzle. The hot gas goes out the back, but the thrust pushes towards the front. Action <–> reaction is explained by Newton’s Third Law of Motion.

Note that the job of the engine is just to overcome the drag of the airplane, not to lift the airplane. A 1 million pound airliner has 4 engines that produce a grand total of 200,000 of thrust. The wings are doing the lifting, not the engines. In fact, there are some aircraft, called gliders that have no engines at all, but fly just fine. Some external source of power has to be applied to initiate the motion necessary for the wings to produce lift. But during flight, the weight is opposed by both lift and drag. Paper airplanes are the most obvious example, but there are many kinds of gliders. Some gliders are piloted and are towed aloft by a powered aircraft, then cut free to glide for long distances before landing. During reentry and landing, the Space Shuttle is a glider; the rocket engines are used only to loft the Shuttle into space.