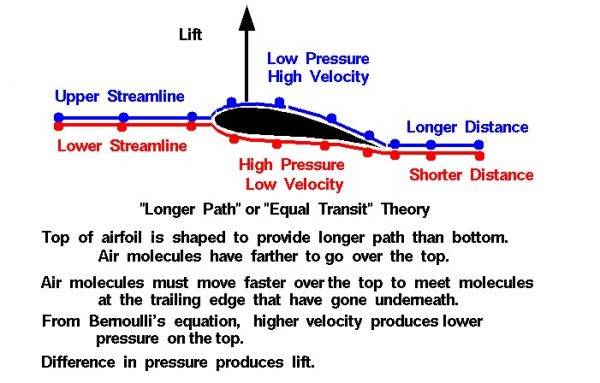 There are many theories of how lift is generated. Unfortunately, many of the theories found in encyclopedias, on web sites, and even in some textbooks are incorrect, causing unnecessary confusion for students.

The theory described on this slide is one of the most widely circulated, incorrect explanations. The theory can be labeled the “Longer Path” theory, or the “Equal Transit Time” theory. The theory states that airfoils are shaped with the upper surface longer than the bottom.

The air molecules (the little colored balls on the figure) have farther to travel over the top of the airfoil than along the bottom. In order to meet up at the trailing edge, the molecules going over the top of the wing must travel faster than the molecules moving under the wing. Because the upper flow is faster, then, from Bernoulli’s equation, the pressure is lower. The difference in pressure across the airfoil produces the lift.

For a constant density, decreasing the area increases the velocity.

Turning to the incorrect airfoil theory, the top of the airfoil is curved, which constricts the flow. Since the area is decreased, the velocity over the top of the foil is increased. Then from Bernoulli’s equation, higher velocity produces a lower pressure on the upper surface. The low pressure over the upper surface of the airfoil produces the lift.

Before considering what is wrong with this theory, let’s investigate the actual flow around an airfoil by doing a couple of experiments using a Java simulator which is solving the correct flow equations. Below the simulator is a text box with instructions. Be sure that the slider on the right of the text box is pulled to the top to begin the experiments

Let’s use the information we’ve just learned to evaluate the various parts of the “Equal Transit” Theory.

Lifting airfoils are designed to have the upper surface longer than the bottom.

Air molecules travel faster over the top to meet molecules moving underneath at the trailing edge.

The upper flow is faster and from Bernoulli’s equation the pressure is lower.