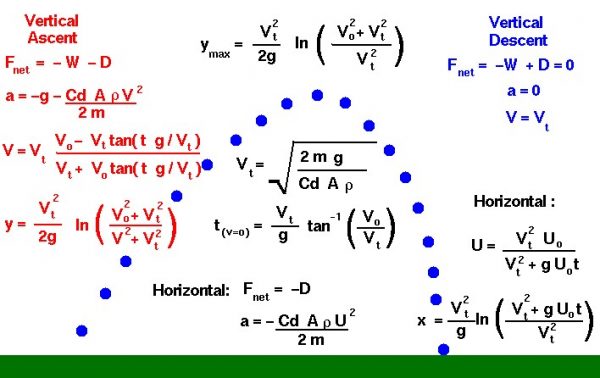 A ball in flight has no engine to produce thrust, so the resulting flight is similar to the flight of shell from a cannon, or a bullet from a gun. This type of flight is called ballistic flight and assumes that weight is the only force acting on the ball. In reality, a baseball or a soccer ball in flight generates a moderate amount of aerodynamic drag and is not strictly ballistic. On this page we develop the equations which describe the motion of a flying ball including the effects of drag.

In the vertical plane, the only forces acting on the ball are the forces of weight and drag. There is a characteristic velocity which appears in many of the equations that is called the terminal velocity because it is the constant velocity that the object sustains during a coasting descent. Terminal velocity is noted by the symbol Vt.

During the vertical descent, for a light object, the weight and drag of an object are equal and opposite. There is no net force acting on the ball and the vertical acceleration is zero.

where a is the acceleration, W is the weight, and D is the drag. The weight of any object is given by the weight equation:

where r is the gas density, Cd is the drag coefficient which characterizes the effects of shape of the ball, A is the cross-sectional area of the ball, and Vt is the terminal velocity.

On the figure at the top, the density is expressed by the Greek symbol “rho”. The symbol looks like a script “p”. This is the standard symbol used by aeronautical engineers. We are using “r” in the text for ease of translation by interpretive software.

The gas density has different surface values on the Earth and on Mars and varies with altitude. On the Moon the gas density is zero. Combining the last three equations, we can determine the terminal velocity:

Now, turning to the ascent trajectory, the ball is traveling at an initial vertical velocity Vo. With the positive vertical coordinate denoted by y, the net vertical force Fnet acting on the ball is given by:

Because the weight of the object is a constant, we can use the simple form of Newton’s second law to solve for the vertical acceleration:

Notice that the acceleration changes with time. Multiply the last term by g/g and use the definition of the terminal velocity to obtain:

The acceleration is the time rate of change of velocity:

where tan-1 is the inverse tangent function, and t is time. The limits of integration for velocity v is from Vo to V and the limits for time t is from 0 to t:

Now take the tangent function of both sides of the equation using the trigonometric identity:

on the right hand side to obtain:

This is the equation for the velocity at any time during the vertical ascent. At the top of the trajectory, the velocity is zero. We can solve the velocity equation to determine the time when this occurs:

To determine the vertical location during the ascent, we have to use another identity from differential calculus:

We previously determined that

where ln is the natural logarithmic function. The limits of integration for velocity v is from Vo to V and the limits for direction y is from 0 to y:

The horizontal equations are a little easier, since the only net force acting on the ball is the drag:

where u is the horizontal velocity. We can use the terminal velocity to simplify this equation:

Integrating the equations, with the limits on the velocity from the initial velocity Uo to U, we obtain:

The horizontal velocity is inversely dependent on the time. We can similarly solve for the location x at any time by integrating the velocity equation: