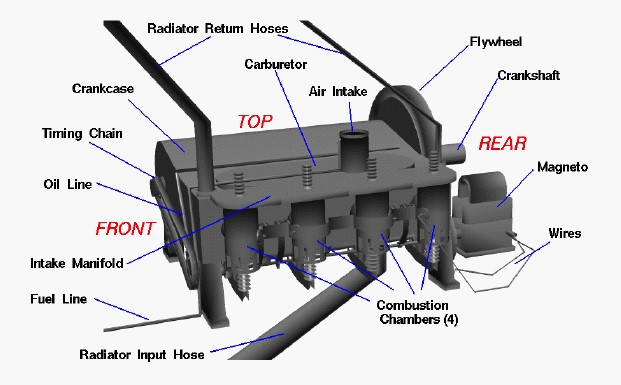 This is a computer drawing of the Wright brothers’ 1903 aircraft engine. This machine powered the first, heavier than air, self-propelled, maneuverable, piloted aircraft; the Wright 1903 Flyer. The brothers’ design is very simple by today’s standards, so it is a good engine for students to study and learn the fundamentals of engines and their operation. On this page we present a description of the basic engine parts and their functions.

On the 1903 flyer, the engine is mounted on the lower wing next to the pilot with the front of the engine, as denoted on the figure, aligned with the front of the airplane. The engine’s only job is to turn two propellers at the rear of the airplane. The propellers provide the thrust force for the aircraft and are connected to the engine by two power chains. Notice that the left power chain has been twisted to make the propellers rotate in opposite directions. Counter-rotating the propellers eliminates any gyroscopic forces on the aircraft.

The brothers were worried that “slop” in the chains, and mis-fires of the engine would cause excessive vibrations on the aircraft. So they installed a large flywheel to the crankshaft. The flywheel is just a large, heavy, metal wheel which damps out vibrations as it rotates. The crankshaft is turned by four pistons which are enclosed in cylinders contained inside the engine crankcase. (The in-line piston arrangement used by the brothers is identical to that used in modern four cylinder automobile engines.) The pistons are driven by hot gases produced by the burning of fuel (gasoline) and air in the combustion chambers located at the end of each cylinder.

Returning to the figure at the top of the page, fuel is fed by gravity from a tank on a wing strut of the airplane and enters the engine through a fuel line. Air is brought into the engine through the air intake on the top of the engine. The fuel is evaporated by heat from the cylinders and mixes with the air in the carburetor on the top of the crankcase. The carburetor for this engine is just a long, flat, enclosed pan with no moving parts. A hole at the entrance connects to the air intake and a hole at the exit connects to the intake manifold. The intake manifold distributes the fuel/air mixture to the four combustion chambers. The manifold is also a pan with one hole at the entrance and four exit holes connected to the intake valve of each combustion chamber.

The intake valve is shown in red and can open and close to let fuel and air into the combustion chamber from the intake manifold. The valve is normally held closed by a spring on top of the intake manifold, but is pulled open during the intake stroke of the piston. At the end of the compression stroke, the fuel is ignited in the combustion chamber by an electric spark. On this figure, electrical parts are colored green. The spark occurs very quickly by the opening of an electrical contact inside the combustion chamber. The timing of the spark is controlled by a cam mounted on a shaft on the bottom of the engine. The combustion of the fuel and air produces heat and high pressure exhaust gases which are used to move the piston inside the cylinder during the power stroke. At the end of the power stroke, residual heat is transferred to the cooling water jacket and the exhaust gases return to atmospheric pressure. The exhaust gases are then pushed out of the combustion chamber through the exhaust valve during the exhaust stroke and the cycle repeats itself. On this figure, exhaust parts are colored blue. The exhaust valve, like the intake valve, can open and close. The valve is held closed by a spring during combustion and is pushed open by a rocker arm during the exhaust stroke. The rocker arm is moved by a cam mounted on a shaft on the bottom of the engine. The motion of the valves and electrical contact are shown in this computer animation.

In this animation, we have cut open cylinder #3 so that you can watch the motion of the valves, cams, rocker arms, and electrical contacts and switches. The spring which moves the electrical contact inside cylinder #3 is partially hidden by the cylinder itself. The spring is barely visible behind the blue exhaust valve spring. You can better see the action of the electric cam and spring on the adjoining cylinder #4 to the right. But notice that the timing of the motion of the switches and valves is different between adjoining cylinders. There is a defined firing order for the cylinders.

Electricity for the ignition spark is generated by the magneto, which is located at the rear of the engine. The electricity is carried to the engine along electrical wires and distributed to the four cylinders by a band connected to the four electrical contacts. On the animation, we have cut the band to allow us to see inside cylinder #3; the band wraps around cylinder #3 in the same way that it wraps around cylinder #2 to the left. The timing of the opening and closing of the valves and the firing of the spark is very important and is controlled by a timing chain on the crankcase at the front of the engine, as shown at the top of the page. The combustion in the chambers and the friction of the pistons and cylinders generate a lot of heat in the engine. The parts are kept cool by a water radiator located on the wing strut. A large hose at the bottom brings the coolant water into the engine and two hoses on the top of the engine return the water to the radiator. An oil lubrication system is also provided for the pistons and crankshaft.