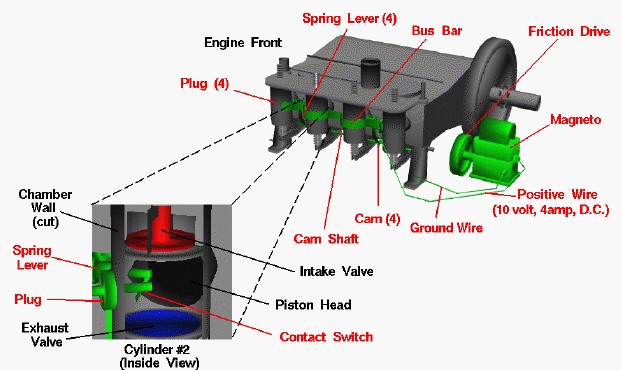 This is a computer drawing of the electrical system of the Wright brothers’ 1903 aircraft engine. This engine powered the first, heavier than air, self-propelled, maneuverable, piloted aircraft; the Wright 1903 Flyer at Kitty Hawk, North Carolina, in December, 1903. To generate thrust for their aircraft, the brothers used twin, counter-rotating propellers at the rear of the aircraft. To turn the propellers, the brothers designed and built a water-cooled, gasoline powered, four-stroke, four cylinder, internal combustion engine.

Electrical power is generated by the magneto at the rear of the engine. The magneto relies on the physics principle of electrical inductance to produce electricity; when a wire is moved through a magnetic field an electrical current is induced in the wire. The magneto has a large, U – shaped, permanent magnet at the top. Between the arms of the magnet, a wire is rotated on a shaft which is turned by the friction drive wheel rubbing on the engine flywheel. An electrical current is induced in the moving wire. The power to turn the magneto is provided by the running engine. The magneto is very similar to the alternator or generator on a modern automobile. The Wright brothers purchased their magneto and it provided a very modest 10 volts at 4 amps in operation. Two wires connect the magneto to the engine; a ground wire to the leg of the crankcase, and a power wire to the bus bar on the outside of the four combustion chambers of the engine.

On each combustion chamber, the bus bar conducts electricity to an ignition plug which is screwed through the wall of the chamber. The plug is insulated from the wall of the chamber. Inside the chamber, there is a contact switch which is movable. When the switch is closed, a circuit is created and electricity flows through the wires, bus bar and plug. When the switch is opened quickly, a spark is generated. You can see this effect if you pull the plug on an operating appliance at home. Spring levers mounted on the outside of the chamber are used to open and close the contact switch by an insulated shaft which passes through the wall of the combustion chamber. The spring levers are attached to the crankcase of the engine which is grounded to the magneto. The levers are activated by cams which turn on a cam shaft under the engine. The cam shaft is linked by gears to the exhaust valve cam shaft which is turned by the timing chain. The gears and cams insure that the contact switch is opened, and the ignition spark occurs at just the proper moment of the engine cycle. Here’s a computer animation of the action of the levers and contact switch:

In this animation, we have cut open cylinder #3 so that you can watch the motion of the valves, cams, rocker arms, and electrical contacts and switches. The spring which moves the electrical contact inside cylinder #3 is partially hidden by the cylinder itself. The spring is barely visible behind the blue exhaust valve spring. You can better see the action of the electric cam and spring on the adjoining cylinder #4 to the right. But notice that the timing of the motion of the switches and valves is different between adjoining cylinders. On the animation, we have cut the bus bar to allow us to see inside cylinder #3; the bar wraps around cylinder #3 in the same way that it wraps around cylinder #2 to the left.

How Does It Work?

To understand how the electrical system works, we have drawn a simplified wiring diagram of the engine:

We have numbered the cylinders (and combustion chambers) from 1 to 4 going from the front of the engine to the back. The magneto, wires, contact switches, and grounded cylinders produce an electrical circuit, which you have heard about in school. This particular type of circuit is called a parallel circuit because there are parallel lines running through the four cylinders. The contact switch on any cylinder can be opened or closed without affecting the neighboring cylinders. (If the cylinders were wired in series, opening any switch would cut the current to all the cylinders.)

Throughout nearly all of the cycle for a given cylinder, the contact switch is held opened and no current flows through the system. But when the cam pushes the levers, the contact switch in one cylinder is initially closed which produces a current of electricity from the magneto through the bus bar, switch, and levers, to the crankcase and back to the magneto. This condition for cylinder #1 is shown at the top of the figure. As the cam continues to move, the contact switch is suddenly pulled open, as shown at the bottom of the figure. A small spark occurs as the switch is opened (you can see this effect if you pull the plug on an operating lamp in your home.) Inside the combustion chamber, this spark is used to ignite the fuel/air mixture at the end of the compression stroke. The contact switch is kept open inside the cylinder until the next firing. The opening of the switch is called an electrical break (of the circuit) and this firing technique is called a “make and break” system. The four cylinders of this engine fire one at a time in a firing order which is repeated. The brothers used a 1 – 3 – 4 – 2 firing order to balance out the firings and make the engine run as smooth as possible.

Historical note – Notice that in the “make and break” system there are moving parts located inside the combustion chamber. Modern internal combustion engines do not use this method, but instead use a spark plug to produce the ignition spark. A spark plug has no moving parts, which is much safer than the method used by the brothers. Modern systems also use very high voltage relative to the brothers’ system. But the brothers had one advantage on modern systems. Their contact points moved during the engine cycle, so they stayed relatively clean. Modern spark plugs can foul because of oil and dirt present in the combustion chamber collecting in the gap of the plug. The “make and break” system does not have this problem.