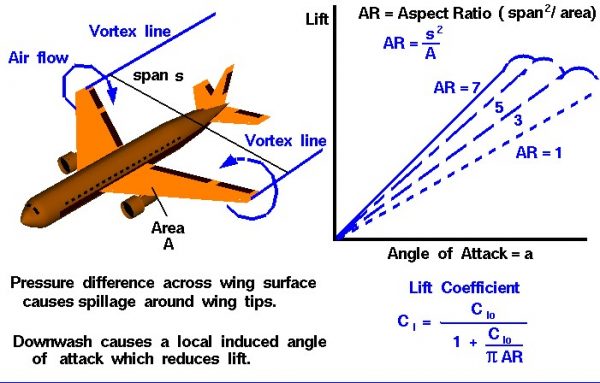 There are many factors which influence the amount of aerodynamic lift which a body generates. Lift depends on the shape, size, inclination, and flow conditions of the air passing the object. For a three dimensional wing, there is an additional effect on lift, called downwash, which will be discussed on this page.

For a lifting wing, the air pressure on the top of the wing is lower than the pressure below the wing. Near the tips of the wing, the air is free to move from the region of high pressure into the region of low pressure. The resulting flow is shown on the figure at the left by the two circular blue lines with the arrowheads showing the flow direction. As the aircraft moves to the lower left, a pair of counter-rotating vortices are formed at the wing tips. The lines marking the center of the vortices are shown as blue vortex lines leading from the wing tips. If the atmosphere has very high humidity, you can sometimes see the vortex lines on an airliner during landing as long thin “clouds” leaving the wing tips. The wing tip vortices produce a downwash of air behind the wing which is very strong near the wing tips and decreases toward the wing root. The effective angle of attack of the wing is decreased by the flow induced by the downwash, giving an additional, downstream-facing, component to the aerodynamic force acting over the entire wing. The downstream component of the force is called induced drag because it faces downstream and has been “induced” by the action of the tip vortices. The lift near the wing tips is defined to be perpendicular to the local flow. The local flow is at a lower effective angle of attack than the free stream flow because of the induced flow. Resolving the tip lift back to the free stream reference produces a reduction in the lift coefficient of the entire wing.

The aspect ratio is the square of the span s divided by the wing area A. For a rectangular wing this reduces to the ratio of the span to the chord. Long, slender, high aspect ratio wings have less lift reduction than short, thick, low aspect ratio wings as shown in the graph on the right of the figure. Reduced lift coefficient is a three dimensional effect related to the wing tips. The longer the wing, the farther the tips are from the main portion of the wing, and the smaller the lift reduction.

This picture dramatically shows airplane downwash. The picture was sent to us by Jan-Olov Newborg, from Stockholm, Sweden, and was originally taken by Paul Bowens. In the picture, the Cessna Citation has just flown above a cloud deck shown in the background. The downwash from the wing has pushed a trough into the cloud deck. The swirling flow from the tip vortices is also evident. Another slide describes the interesting problems downwash caused for early aerodynamicists.