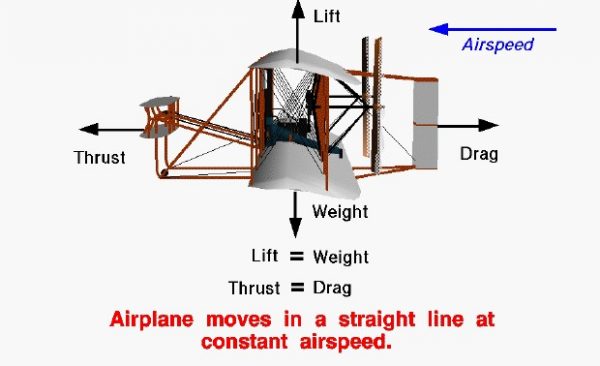 There are four forces that act on an aircraft in flight: lift, weight, thrust, and drag. From Newton’s first law of motion we know that an object at rest will stay at rest, and an object in motion (constant velocity) will stay in motion unless acted on by an external force. If there is no net external force, the object will maintain a constant velocity. In an ideal situation, the forces acting on an aircraft in flight can be in equilibrium and produce no net external force. In this situation the lift is equal to the weight, and the thrust is equal to the drag. This flight condition is called a cruise condition for the aircraft. While the weight decreases due to fuel burned, the change is very small relative to the total aircraft weight. The aircraft maintains a constant airspeed called the cruise velocity. Except during take-off, the Wright brothers’ powered aircraft spent most of the flight time in a cruise condition.