This is a computer drawing of the cooling system of the Wright brothers’ 1903 aircraft engine. This engine powered the first, heavier than air, self-propelled, maneuverable, piloted aircraft; the Wright 1903 Flyer at Kitty Hawk, North Carolina, in December, 1903. To generate thrust for their aircraft, the brothers used twin, counter-rotating propellers at the rear of the aircraft. To turn the propellers, the brothers designed and built a water-cooled, gasoline powered, four-stroke, four cylinder, internal combustion engine.

In any internal combustion engine, fuel and oxygen are combined in a combustion process to produce the power to turn the crankshaft of the engine. The job of the cooling system is to prevent damage to the engine parts which could result from high temperatures. The cooling system of the Wright brothers is composed of three main components; a radiator mounted on the airframe, the hoses which connect the radiator to the crankcase, and a water jacket around the cylinders of the motor. 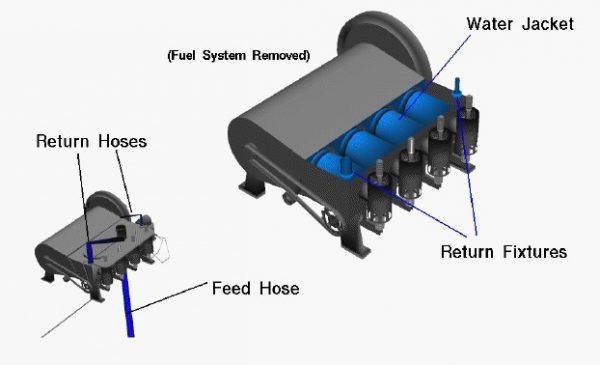 On this figure we show the details of the coolant system associated with the engine itself. On the right side of the figure we have removed the fuel and electrical systems from the engine and peeled back the covering of the crankcase to show the water jacket surrounding the cylinders. Notice that the brothers’ design only cooled the engine cylinders and not the combustion chambers located on the outside of the crankcase. Because of this design, the combustion chambers would glow, red hot, during flight.

Unlike modern automobiles, the Wright brothers did not use a water pump to circulate the cooling water on the 1903 engine. They relied on a fluid dynamic effect called diffusion to move the fluid. Diffusion is the result of the random motion of the molecules and tends to even out all differences in a fluid. If one part of a fluid is hot and the other cold, eventually it all comes to the same temperature through diffusion. Unfortunately, this a much weaker effect than convection which is movement of a fluid because of ordered motion, like pumping. Modern water pumps use convection to move fluids. The brothers 1903 cooling system did not move much water and was very inefficient. Luckily, it did not have to work for more than a few minutes. On later engines, the brothers used water pumps.