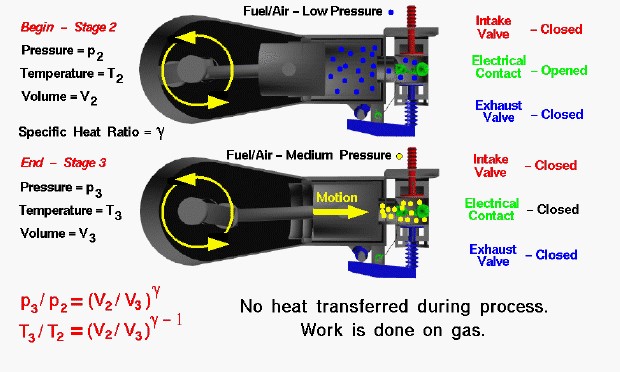 At the end of the intake stroke the fuel/air mixture has been drawn into the cylinder at low (nearly atmospheric) pressure by the motion of the piston towards the crankshaft at the left. From our considerations of the engine cycle, we designate this condition as Stage 2 of the Otto cycle. The intake valve is then closed and the piston begins to move back towards the combustion chamber at the right. With both valves closed, the combination of the cylinder and combustion chamber form a completely closed vessel containing the fuel/air mixture. As the piston is pushed to the right, the volume is reduced and the fuel/air mixture is compressed. When the piston has moved completely to the right, we designate the conditions as Stage 3 of the cycle. During the compression stroke, the electrical contact is kept opened. When the volume is the smallest, and the pressure the highest, the contact is closed and current flows through the completed circuit. The switch is then quickly opened, producing a spark which ignites the mixture.

During the compression, no heat is transferred to the fuel/air mixture. As the volume is decreased because of the piston’s motion, the pressure in the gas is increased. In the figure, the mixture has been colored blue at stage 2 and yellow at stage 3 to denote a moderate increase in pressure. To produce the increased pressure, we have to do work on the mixture, just as you have to do work to inflate a bicycle tire using a pump. There are thermodynamic equations which relate the pressure increase and temperature increase to the change in volume: