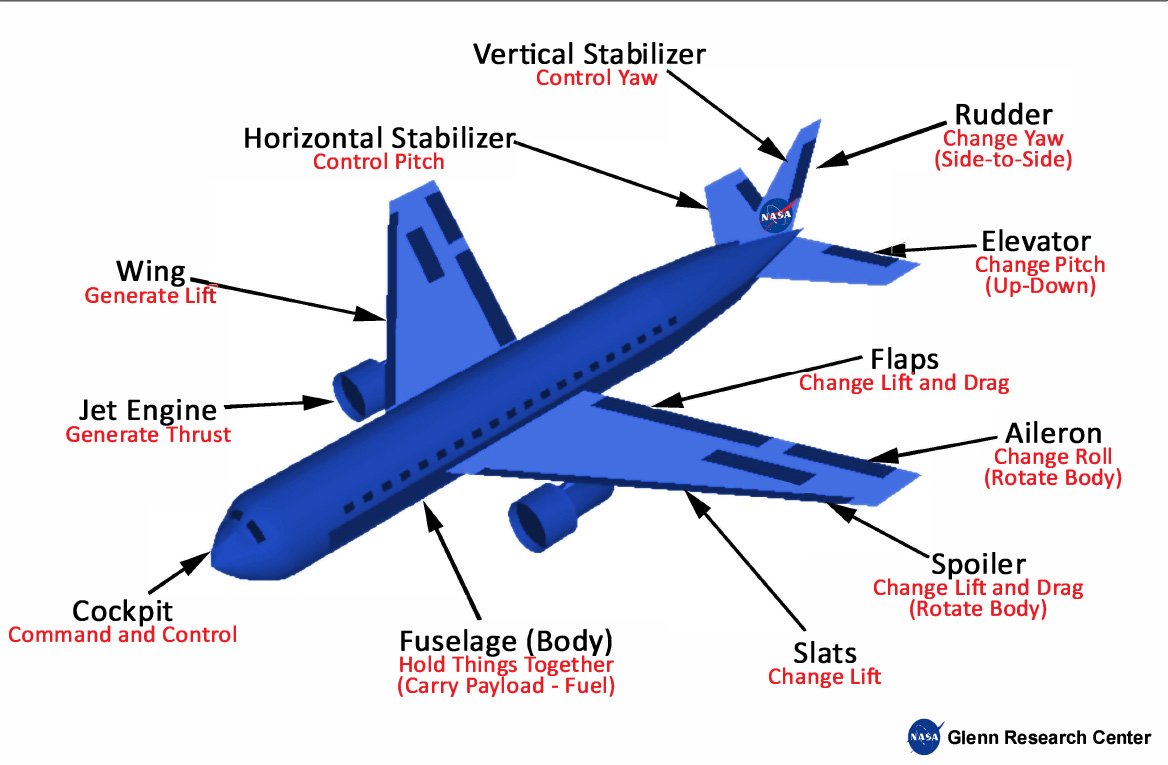 This page shows the parts of an airplane and their functions. Airplanes are transportation devices which are designed to move people and cargo from one place to another. Airplanes come in many different shapes and sizes depending on the mission of the aircraft. The airplane shown on this slide is a turbine-powered airliner which has been chosen as a representative aircraft.

For any airplane to fly, one must lift the weight of the airplane itself, the fuel, the passengers, and the cargo. The wings generate most of the lift to hold the plane in the air. To generate lift, the airplane must be pushed through the air. The air resists the motion in the form of aerodynamic drag. Modern airliners use winglets on the tips of the wings to reduce drag. The turbine engines, which are located beneath the wings, provide the thrust to overcome drag and push the airplane forward through the air. Smaller, low-speed airplanes use propellers for the propulsion system instead of turbine engines.

At the rear of the wings and stabilizers are small moving sections that are attached to the fixed sections by hinges. In the figure, these moving sections are colored brown. Changing the rear portion of a wing will change the amount of force that the wing produces. The ability to change forces gives us a means of controlling and maneuvering the airplane. The hinged part of the vertical stabilizer is called the rudder; it is used to deflect the tail to the left and right as viewed from the front of the fuselage. The hinged part of the horizontal stabilizer is called the elevator; it is used to deflect the tail up and down. The outboard hinged part of the wing is called the aileron; it is used to roll the wings from side to side. Most airliners can also be rolled from side to side by using the spoilers. Spoilers are small plates that are used to disrupt the flow over the wing and to change the amount of force by decreasing the lift when the spoiler is deployed.

As mentioned above, the aircraft configuration in the figure was chosen only as an example. Individual aircraft may be configured quite differently from this airliner. The Wright Brothers 1903 Flyer had pusher propellers and the elevators at the front of the aircraft. Fighter aircraft often have the jet engines buried inside the fuselage instead of in pods hung beneath the wings. Many fighter aircraft also combine the horizontal stabilizer and elevator into a single stabilator surface. There are many possible aircraft configurations, but any configuration must provide for the four forces needed for flight.