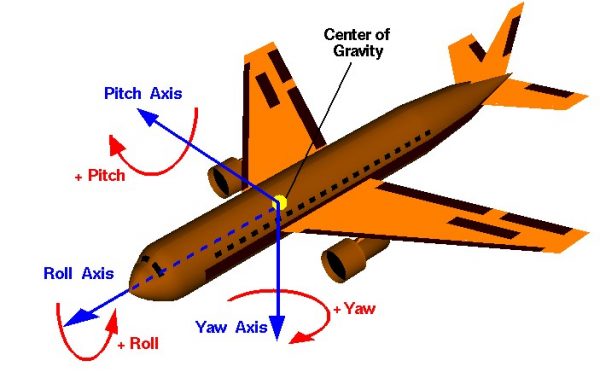 The yaw axis is defined to be perpendicular to the plane of the wings with its origin at the center of gravity and directed towards the bottom of the aircraft. A yaw motion is a movement of the nose of the aircraft from side to side.

The pitch axis is perpendicular to the yaw axis and is parallel to the plane of the wings with its origin at the center of gravity and directed towards the right wing tip. A pitch motion is an up or down movement of the nose of the aircraft.

The roll axis is perpendicular to the other two axes with its origin at the center of gravity, and is directed towards the nose of the aircraft. A rolling motion is an up and down movement of the wing tips of the aircraft.

In flight, the control surfaces of an aircraft produce aerodynamic forces. These forces are applied at the center of pressure of the control surfaces which are some distance from the aircraft cg and produce torques (or moments) about the principal axes. The torques cause the aircraft to rotate. The elevators produce a pitching moment, the rudder produces a yawing moment, and the ailerons produce a rolling moment. The ability to vary the amount of the force and the moment allows the pilot to maneuver or to trim the aircraft.

The first aircraft to demonstrate active control about all three axes was the Wright brothers’ 1902 glider.