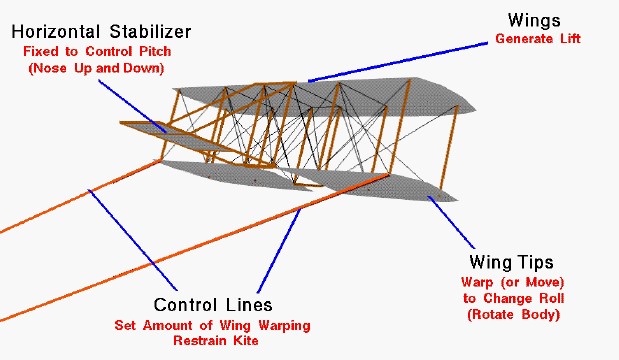 Between 1900 and 1902, the Wright brothers built and tested a series of unpowered aircraft. The brothers used these aircraft to flight test some of their ideas concerning the control of aircraft, to learn the fundamentals of aerodynamics, and to learn to fly. The aircraft were flown both as kites and as piloted gliders. On this slide we show a computerized drawing of the 1900 aircraft being flown as a kite.

The 1900 aircraft was the first large aircraft built by the Wrights. It was flown repeatedly at Kitty Hawk, North Carolina, during 1900 to verify and demonstrate roll control by using wing warping. Kitty Hawk was chosen as the flight location because of the steady breeze which blows in from the Atlantic and because the sand dunes provided a “soft” landing during crashes and very few “kite-eating” trees. The kite was flown by several members of the ground crew holding the Control Lines. The control lines connected to some pulleys and control wires on the wings. Pulling a control line caused the wing tip on that side to move, or warp, relative to the rest of the wing. Changing the shape of the wing tip changes the amount of lift which that portion of the wing produces. An imbalance of lift on the wing causes the kite to roll and move to the side. Controlling the amount of warp allows you to control the roll of the aircraft.

The Wright brothers also flew the 1901 aircraft as a kite. The 1901 aircraft did not glide as well as they had calculated and the brothers used the information from the kite experiments to identify and quantify the problem. Based on the kite results from 1901, the brothers made their own estimate of the Smeaton pressure coefficient, which was the reference condition for all published aerodynamic data at that time. The Wrights had used the accepted value of .005 in the design of the 1901 aircraft. But their data indicated that .0033 was closer to the correct answer. The currently accepted value of this coefficient is .00327.

Note the very high angle of attack needed to support the weight of the aircraft. That’s because the aircraft had been designed with “optimistic” data; the brothers were expecting much better performance than they obtained because the value of the Smeaton coefficient used in the design was too high. Now compare this flight attitude with this picture of the 1902 aircraft:

The design of the 1902 aircraft had been improved based on wind tunnel tests in late 1901. The more efficient aircraft flies at a lower angle of attack. The brothers also used the more accurate value of the Smeaton coefficient in this design. You can compare the performance of these aircraft by using an interactive performance prediction program on another page.

The forces on an aircraft when flown as a kite are only slightly different from the forces on the same aircraft when flown as a glider. This enabled the Wright brothers to test out the performance of their gliders by flying them as kites. Modern aircraft fly too fast to be tested as kites. But you can learn the same things that the Wright brothers learned and in the same way by flying your own kite. It’s fun!