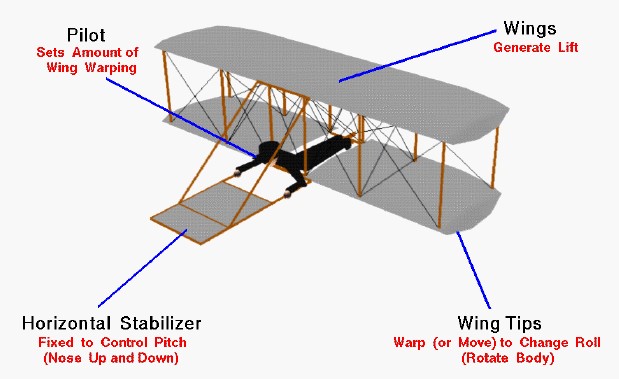 Between 1900 and 1902, the Wright brothers built and tested a series of unpowered aircraft. The brothers used these aircraft to flight test some of their ideas concerning the control of aircraft, to learn the fundamentals of aerodynamics, and to learn to fly. The aircraft were flown both as kites and as piloted gliders. On this slide we show a computerized drawing of the 1900 aircraft being flown as a glider.

The 1900 aircraft was the first large aircraft built by the Wrights. It was flown repeatedly at Kitty Hawk, North Carolina, during 1900 to verify and demonstrate roll control by using wing warping. Kitty Hawk was chosen as the flight location because of the steady breeze which blows in from the Atlantic and because the sand dunes provided a “soft” landing during crashes. The plane was flown mostly as a kite, but on the last day of the season it was flown nearly a dozen times as a glider. This was the first flight experience for the Wright brothers.

This was a large aircraft as indicated by the size of the pilot on the lower wing. The pilot could control the movement of the glider by pushing a pedal with his feet. The pedal was connected to control wires which pulled on the trailing edge of the wing tips. The wing tips on one side of the aircraft would be pulled downward more than on the other side. Changing the shape of the wing tip changes the amount of lift which that portion of the wing produces. This would create more lift on one side of the aircraft than on the other. An imbalance of lift on the wing causes the glider to roll towards the side with the lower lift. The airplane then turns in the direction of the lower lift as well. Controlling the amount of warp allows you to control the roll of the aircraft and the direction in which it flies..

Unfortunately, there are no pictures of the 1900 aircraft flying as a glider. There are however several pictures of the 1901 and 1902 aircraft in flight. The 1901 is on the left and the 1902 is below. You can easily see the longer wing span of the 1902 and the newly added rudder. The longer wing span reduced the overall drag of the aircraft and increased the gliding distance. The 1901 aircraft was flown more than 50 times as a glider, while the 1902 was flown more than 1000 times. At the conclusion of 1902, the Wright brothers were the most experienced glider pilots in the world.