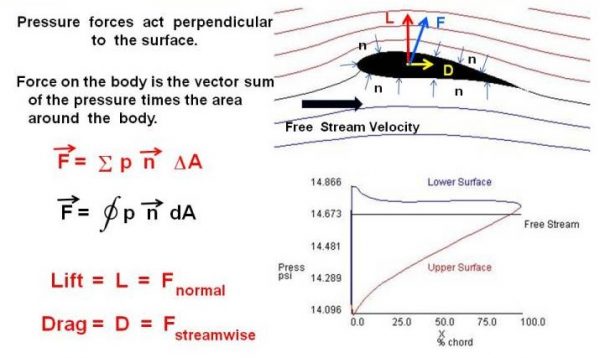 When two solid objects interact in a mechanical process, forces are transmitted, or applied, at the point of contact. But when a solid object interacts with a fluid, things are more difficult to describe because the fluid can change its shape. For a solid body immersed in a fluid, the “point of contact” is every point on the surface of the body. The fluid can flow around the body and maintain physical contact at all points. The transmission, or application, of mechanical forces between a solid body and a fluid occurs at every point on the surface of the body. And the transmission occurs through the fluid pressure.

The magnitude of the force acting over a small section of an object immersed in a fluid equals the pressure p times the area A of the section. A quick units check shows that:

As discussed on the fluid pressure slide, pressure is a scalar quantity related to the momentum of the molecules of a fluid. Since a force is a vector quantity, having both magnitude and direction, we must determine the direction of the pressure force. Pressure acts perpendicular (or normal) to the solid surface of an object. So the direction of the force on the small section of the object is along the normal to the surface. We denote this direction by the letter n.

The normal direction changes from the front of the airfoil to the rear and from the top to the bottom. We indicate this variation on the figure by several small arrows pointing perpendicular to the surface and labeled with an n. To obtain the net mechanical force over the entire solid object, we must sum the contributions from all the small sections. Mathematically, the summation is indicated by the Greek letter sigma (

) The net aerodynamic force F is equal to the sum of the product of the pressure p times the incremental area delta A in the normal direction n.

In the limit of infinitely small sections, this gives the integral of the pressure times the area around the closed surface. Using the symbol S dA for integration, we have:

where the integral is taken all around the body. On the figure, that is why the integral sign has a circle through it.

If the pressure on a closed surface is a constant, there is no net force produced because the summation of the directions of the normal adds up to zero. For every small section there is another small section whose normal points in exactly the opposite direction.

Definitions of Lift and Drag

To summarize, for any object immersed in a fluid, the mechanical forces are transmitted at every point on the surface of the body. The forces are transmitted through the pressure, which acts perpendicular to the surface. The net force can be found by integrating (or summing) the pressure times the area around the entire surface. For a moving flow, the pressure will vary from point to point because the velocity varies from point to point. For some simple flow problems, we can determine the pressure distribution (and the net force) if we know the velocity distribution by using Bernoulli’s equation.