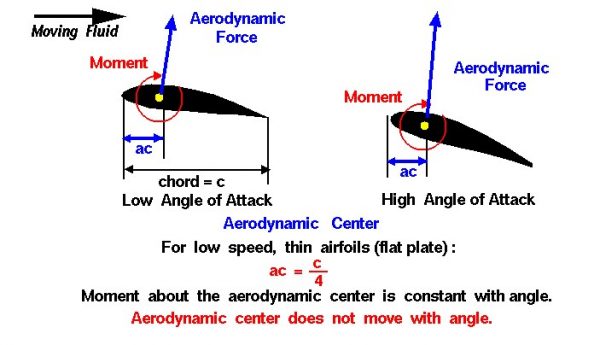 For symmetric airfoils, the aerodynamic moment about the ac is zero for all angles of attack. With camber, the moment is non-zero and constant for thin airfoils. For a positive cambered airfoil, the moment is negative and results in a counter-clockwise rotation of the airfoil. With camber, an angle of attack can be determined for which the airfoil produces no lift, but the moment is still present. For rectangular wings, the wing ac is the same as the airfoil ac. But for wings with some other planform (triangular, trapezoidal, compound, etc.) we have to find a mean aerodynamic center (mac) which is the average for the whole wing. The computation of the mac depends on the shape of the planform.