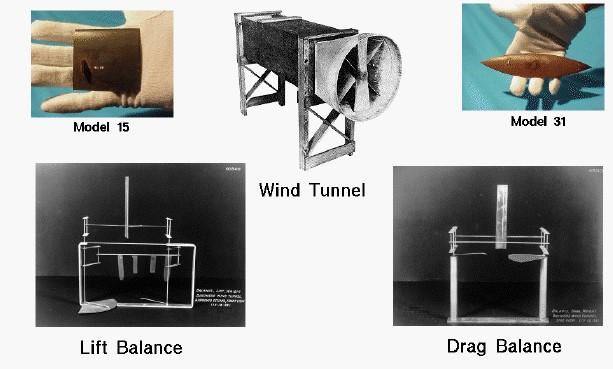 At the end of 1901, the Wright brothers were frustrated by the flight tests of their 1900 and 1901 gliders. The aircraft were flown frequently up to 300 feet in a single glide. But neither aircraft performed as well as predicted using the design methods available to the brothers. Based on their measurements, the 1901 aircraft only developed 1/3 of the lift which was predicted by using the Lilienthal data. During the fall of 1901, the brothers began to question the aerodynamic data on which they were basing their designs. Their kite and glider experiments convinced them that the accepted value of the Smeaton pressure coefficient (.005), which is used in both the lift and drag design equations, was in error. The brothers determined that a value closer to .0033 would more accurately describe their flight tests. But this did not account for all of the performance differences. There was still some questions about the lift and drag coefficients which were obtained by Lilienthal and were being used by the Wrights.

The brothers decided to measure the lift and drag coefficients themselves. They first built some small models of a wing and a flat plate and attached them to a bicycle wheel. They used the Lilienthal data to predict the angle of rotation of the wheel at which the drag of the flat plate would exactly balance the lift of the wing. They attached the wheel to the handles of a bicycle and rode through the streets of Dayton to produce a wind over the models. The test indicated a much lower value of lift from their model than the lift predicted by the Lilienthal data. But the test conditions were hard to control. So the brothers decided to build a wind tunnel to produce a more controlled environment. They would compare the results they found in the wind tunnel to the performance they had measured during their kite and glider flights.

At the top of this page is a picture of a replica of this wind tunnel. The wind tunnel was a simple open-return design with a fan pushing a flow of air through an enclosed square box and then exiting into the room. Models of their wings were placed in the test section of the wind tunnel, at the far left in the figure, on a forces measuring device. One brother would record the output of this device by looking through a glass window on the top of the test section.

To measure the lift and drag, the brothers built two balances, one for lift, shown at the lower left, and the other for drag, shown at the lower right. The brothers built models of their wing designs using materials available in their bike shop. Strips of 20 gauge steel (1/32 inch thick) were cut, hammered, filed and soldered to produce various shapes. Two of the actual models are shown at the top of this page, with a gloved hand for a size comparison. These photos are provided by the Franklin Institute where the actual model are kept. The Wright brothers made between one and two hundred models and made quick preliminary tests in October, 1901, to develop their test techniques and to investigate a wide range of design variables. Some of the models were used in combination to study bi- and tri-wing designs. They would test each model on both balances to determine the effect of design variables on lift and drag. Following the preliminary experiments, they chose about 30 of their best designs for more detailed parametric studies. In these experiments, only one design variable was changed between models. Then by comparing the performance of the two models they could determine the effect of the single changed variable on lift and drag. If you use the interactive wind tunnel simulation, you can duplicate their results and study these effects for yourself.

The wind tunnel tests were conducted from September to December of 1901. At the conclusion of the tests, the brothers had the most detailed data in the world for the design of aircraft wings. They used this data to design the 1902 aircraft which overcame the problems encountered in 1900 and 1901. They also used the data in the design of their propellers for the 1903 aircraft.