Space Communications and Navigation (SCaN) is developing new communications technology’s that can be used to increase the amount of science data returned on future space missions. In an effort to satisfy growing user requirements on data return and expand the capabilities of NASA’s exploration and science missions, there is a drive to accelerate the infusion of optical communications technology with existing radio frequency (RF) capabilities into one operable network.

Communicating from Earth to any spacecraft is a complex challenge, largely due to the extreme distances involved. When data is transmitted and received across thousands and even millions of miles in space, the delay and potential for disruption or data loss is significant. Delay Tolerant Networking (DTN) is NASA’s solution to reliable internetworking for space missions. The High Rate Delay Tolerant Networking (HDTN) project at NASA Glenn Research Center (GRC) is developing technology that can act as a high-speed path for moving data between spacecraft payloads, and across communication systems that operate on a range of different rates. 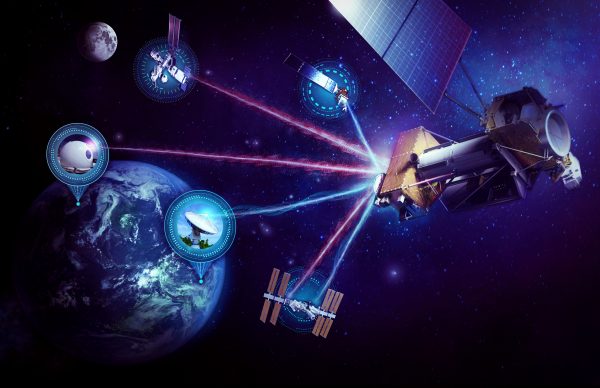 DTN is a computer networking model and a system of rules for transmitting information, often referred to as a protocol suite, that extends the terrestrial Internet capabilities into the challenging communication environments in space where the conventional Internet does not work well. These environments are typically subject to frequent disruptions, links that are limited to one direction, possibly long delays and high error rates.

The HDTN team at NASA GRC has identified several technological solutions to address the space network’s needed upgrades while considering the existing RF infrastructure. The project aims to provide reconfigurable store, forward and routing capabilities that will support evolving mission requirements and developing infrastructure, while providing feedback paths to enable the foundations for future system cognition and autonomy. The implementation includes both proactive and reactive link management solutions to utilize nodes across a heterogenous network in an optimal manner.

Although the hardware and software specifics of an HDTN implementation will be application dependent, the relationship between DTN as a protocol standard and processing architecture, memory storage and I/O elements will remain constant as a reference architecture.  The resulting networked buffering solution is general enough to provide mission scalability and interoperability with other DTN implementations.

In May 2016, the International Space Station implemented an institutional Delay Tolerant Network (DTN) service to support payloads. The Space Station DTN implementation greatly enhances the reliability of the payload science data transmissions and reduces operational overhead and planning and provides an architecture to support future mission support applications. The research and development team at NASA Glenn is currently working on an application for the International Space Station. The Space Station HDTN implementation is software-based to function on the existing processors on-orbit. The prototype has successfully and consistently demonstrated bundle routing across a test bed emulator in the laboratory.

The work being completed at NASA GRC is done in collaboration with NASA Marshall Space Flight Center, and will be combined with their DTN implementation, known as DTN-ME, for delivery to the Space Station.  Future spacecraft applications may require faster rates than the current arch texture can provide, so a hardware accelerated version of HDTN is also under development, targeting 100-200 Gbps, using field programmable gate arrays.