The RealTOR project has several subsystems under development, including the transmitter FPGA, atmospheric link emulation, and the RealTOR system, which consists of the fiber device, COTS Superconducting Nanowire Single-Photon Detectors (SNSPDs), and FPGA-based receiver. The following technologies enable RealTOR system capabilities on the Low-Cost Optical Terminal (LCOT) ground station at the Goddard Geophysical and Astronomical Observatory in Greenbelt, Maryland.

When dealing with space to Earth optical communications, lasers are initially transmitted from a spacecraft and received by an optical telescope attached to a ground station on Earth. In the RealTOR system, the fiber device acts as a bridge, connecting infrared light outputs from an optical telescope on the LCOT ground station to the single photon detector located in the equipment shelter.

The COTS single photon detector senses the infrared light transmitted by the fiber device; when a photon hits the detector, an electrical pulse is sent out to the Field Programmable Gate Array (FPGA) based receiver for processing.

The COTS FPGA-based receiver completes the final role for the RealTOR system. After receiving electrical pulses from the single photon detector, the receiver decodes the pulses into readable, measurable data for NASA.

The COTS FPGA-based transmitter comes into play with Earth to space communications, by enabling ground stations to send optical communications out to distant spacecraft. 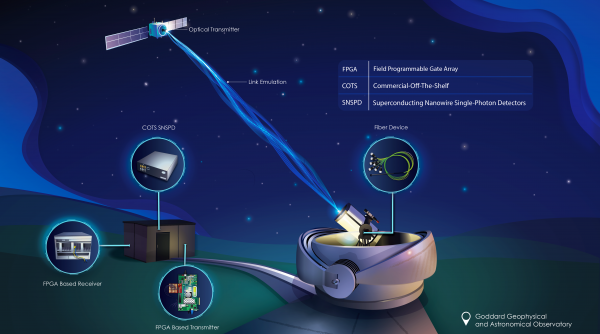 The RealTOR low-cost receiver aims to increase the use of photon counting optical communications and infuse internationally the use of the CCSDS Optical Communications HPE standard. This development is anticipated to increase reliability and affordability of ground-based photon-counting optical receivers for both government and industry applications.