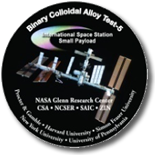 The BCAT-5-3D-Melt sample will consist of a monodisperse nearly-hard-sphere colloidal suspension near its crystallization point. For this investigation small temperature changes that change the particle volume fraction will move the equilibrium system towards and away from the melting transition. The key ingredient in these samples is a thermosensitive polymer, poly(N-isopropylacrylamide (NIPA); the temperature-sensitive character of the samples stems from the temperature dependent solubility of NIPA polymer in water. Below its theta temperature (the temperature at which the coiled polymer molecules expand to their full contour lengths and become rod-shaped) of approximately 31 degrees C, water is a good solvent and NIPA polymer assumes a swollen coil form; in this regime a small increase of temperature increases monomer-monomer attractions and thus the size of the isolated polymer decreases. Above the theta temperature, water is a poor solvent and NIPA has a collapsed globule form.

The BCAT-5-3D-Melt experiment will simply record sample temperature and observe (by photography) whether the sample crystallizes, noting at what temperature the sample experiences the fluid-solid transition. This information will be also be useful for future experiments planned for ISS.

BCAT-5-PhaseSep is a follow-on experiment to BCAT-3, which has been performed on several ISS increments, since increment 8, and BCAT-4, which was begun during Increment 17. Fabric enhancers are composed of mixtures of vesicle and polymers which, in some cases, form weak particle gels. These gels often coarsen exhibiting sintering, cracking or collapse, which significantly reduce the product shelf life. The factors that contribute to coarsening are enigmatic, as the processes are often concealed by the gravitational compression of the gel. Microgravity experiments offer a unique opportunity to elucidate coarsening mechanisms in these weak gel systems.

The BCAT-5-Compete samples consist of colloids suspended in solvent with added polymer. The polymer allows scientists to adjust the particle interactions though depletion attraction (for example, if the polymers are pushing on all sides of the colloidal particles in solution and two particles touch or one comes close to a wall, the polymers are no longer pushing on all sides and this models attraction). By changing the amount of colloid and the relative amount of colloid and polymer, the equilibrium state of the sample can be changed. The BCAT-5-Compete samples will have equilibrium concentrations that result in mixtures of colloid-liquids, colloidal gas, and colloidal crystal. The purpose of these experiments is to study the kinetics that lead to these unique solutions.

The samples will be mixed (thoroughly randomized) and are expected to take several days to reach a nearly equilibrium state. During this time the EarthKAM system will be used to take high-resolution photographs of the samples at regular intervals. As the phase separation/crystallization kinetics begins immediately after the samples are mixed, the interval between images should be relatively short. As the kinetics proceed, the time between images can be increased. Imaging such as this has been performed during BCAT-3 and BCAT-4. The downlinked images will be analyzed using standard techniques to measure the spatial size of concentration variations in the sample or sizes of crystallites as a function of time.

Because crystals may be present, the BCAT-5-Compete samples will likely require that a small flashlight be used to determine optimal lighting and camera position. Once this is determined, the experiment can proceed using the EarthKAM software to control the camera to make a movie of the crystal formation process in an effort to record information about the time dependence of crystal formation.

Ultimately, the experiment is designed to determine if in samples that both phase separate and crystallize, if the dynamics of either process is affected by the other. For example, one possible scenario might be that phase separation, which induces local density increases, reduces the crystallite initiation time because of the increased density. These systems are relatively unexamined and a wealth of new phenomena may be observed.

For the SeededGrowth Sample (9), plans are to experimentally explore the theoretical prediction that the use of seed particles can be used as a way to control the size of crystallites. The control of crystallite size is important in many industrial processes. By introducing the right size and concentration of ‘nano-dirt’, we use this experiment to record the effect of large (11.5X) spherical seed particles on crystallization. Small nuclei grow on the seed and as they grow, the presence of a larger curved substrate makes it difficult to maintain an unstrained structure. At some stage, the precritical nuclei break away from the surface, and the critical nucleus is only formed in the bulk. The seed particles are identical to the smaller PMMA spheres, including the thin polymeric steric layer attached to the particle surfaces.