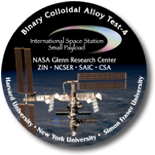 The BCAT-4-Poly polydispersed (characterizing the variation in particle size in the dispersed phase) and seeded samples consist of polymethyl methacrylate (PMMA) particles in an index matching decalin/tetralin mixture (the same colloid and solvent materials as the critical-point samples, but at a volume fraction of ~0.59). Although these samples are at or above the so-called glass transition point, colloidal crystals are expected to form. The particle size distribution and the addition of spherical seed particles should affect the free energy barrier for crystal nucleation, that is, the rate at which crystals nucleate. Photography will be used to study their evolution, with the hope of seeing white light backlit samples diffract the light so that the color changes with viewing angle. This will help reveal the shape of the nuclei, which provide information about the way the crystals grow in microgravity. The crystallites might grow fast in certain crystallographic directions which could give them a layer like structure. Also their shape will give some hints about the processes that limit the growth. Comparison with analogous ground-based experiments will reveal differences in the growth behavior in microgravity.