The thermophysical principles underlying change-of-phase heat transfer systems are not well understood in microgravity conditions and are less than optimized even in earth gravity. This experiment proposes basic experimental and theoretical studies of the nonisothermal Constrained Vapor Bubble (CVB) under microgravity conditions. The CVB represents a passive, wickless heat pipe ideally suited to obtain engineering and fundamental data on phase change heat transfer driven by interfacial phenomena. The proposed study represents a basic scientific study in interfacial phenomena, microgravity fluid physics and thermodynamics, a basic study in thermal transport and an engineering study of a passive heat exchanger. This optical study of vapor bubbles constrained in transparent glass cells at variable temperature increases the basic understanding of heat and mass transfer at phase-change interfaces. The information obtained from the study optimizes the design and operation of passive heat transfer devices for earth and microgravity environments and is critically important for the successful completion of long-term lunar and Mars missions.

In this experiment, the crewmember determines the pressure and temperature gradients driving flow through the heat-exchanger optically by measuring the shape of the vapor-liquid interface. Due to their sensitivity to gravity and to small temperature and pressure gradients, these transport systems need to be studied under microgravity conditions to obtain some essential, fundamental information.

The engineering objectives are to determine the stability, the fluid flow characteristics, the average heat transfer coefficient in the evaporation region, and the heat conductance of the CVB as a function of the heat flow rate and vapor volume. The experiment aims to determine the detailed characteristics of the transport processes in a curved liquid film.

NASA and ZIN Technologies developed the experimental setup for flight aboard the International Space Station as a part of the Fluids Integrated Rack (FIR). The Light Microscopy Module (LMM) developed as a part of the FIR consists of a completely automated optical microscope performs a variety of experiments. One of the first experiments intended for the LMM is the CVB experiment.

The assembly consists of a quartz cuvette that is closed at one end. The cuvette cavity is 3 mm 3 mm on the inside and is about 30 mm long. The thickness of the cuvette wall is 1.25 mm, making the outside dimension 5.5 mm 5.5 mm. Thermocouples are attached to the outside surface of the quartz cuvette by drilling holes into the surface of the quartz. A heater is attached to supply heat for evaporation of the working fluid at the closed end of the cuvette. The heater is insulated from all sides so that all the electrical heat input goes into the cuvette only. The open end is sealed with a cold finger that is kept at a constant known low temperature and drains the heat away. To measure pressure, a pressure transducer is attached to the assembly. The cold finger has small holes built into it to create a continuous liquid phase in order to transmit the pressure. The crewmember views the inside surface of the cuvette with the microscope. The CVB module is designed in such a way that the entire assembly containing the experiment cuvette, the thermocouple assembly and the pressure transducer makes a module which can be easily inserted into the Light Microscopy Module. The module is mounted on a moveable stage with x, y and z axis motion to bring regions of the cuvette in the field of view of the microscope objective. The x and y stage movement moves the cuvette while the z movement helps in focusing the image. Lastly, the entire LMM can be tilted around its axis so that the cuvette assembly can be oriented perpendicular or horizontal to gravity. 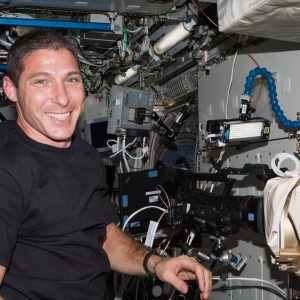 Constrained Vapor Bubble-2 (CVB-2)
CVB-2 is a continuation of the original CVB investigation, where the goal is the study of thermophysical principles underlying

ISS Science for Everyone

Science Objectives for Everyone

Constrained Vapor Bubble (CVB) aims to achieve a better understanding of the physics of evaporation and condensation and how they affect cooling processes in microgravity using a remotely controlled microscope and a small cooling device.

Science Results for Everyone

When electronics generate heat in spacecraft, astronauts can’t just open a window to cool things off. This investigation used a wickless heat pipe to better understand how evaporation and condensation affect cooling processes in microgravity. These devices are well-suited to use in space because they contain no moving parts that might need replacement. Researchers observed unanticipated bubble formations, originating at the heater surface and closely followed by an increase of about 10 percent in the overall heat transfer rate. Using these results, researchers developed simple models of bubble formation, which could help develop more efficient microelectronics cooling systems.

Even pipes sweat when things really heat up in microgravity. Researchers saw more condensation when the device surface was superheated, suggesting that small temperature perturbations due to variations in liquid film thickness effectively superheated the vapor, causing condensation. In other words, thickness and temperature disturbances in the liquid film initiated condensation at the heated end and Marangoni stresses (mass transfer along an interface between two fluids) drove that condensed liquid from the center of the heat pipe to its edges, flooding the heated end. These findings further our understanding of thermodynamics in microgravity, important for future space missions (Kundan, 2017).

The project aims to achieve an improved understanding of microscale heat transfer, improved designs for wickless heat pipes, and an increased efficiency in heat transfer devices for cooling critical components. Targeted users are existing microelectronics industry and perhaps military applications. New designs should be able to be developed several months following the analysis and presentation of the results from the experiment.

Several different CVB science modules are developed with different lengths (20 mm, 30 mm and 40 mm). A microscope inside LMM images the length of the science module at different heat settings. The images are sent to the earth for analysis.

The Constrained Vapor Bubble (CVB) experiment is designed to record, for the first time, the complete distribution of vapor and liquid in a heat pipe operated in microgravity and on Earth. This distribution is essential to understanding how heat pipes operate and how to optimize their design. Heat pipes are ideal devices for cooling critical components in microgravity because they require no moving parts to operate; just a heat source and a heat sink. CVB operated aboard the International Space Station over the course of several months in 2010.

An unanticipated nucleate boiling phenomenon was observed in the microgravity environment on International Space Station during operation of the experiment. Surveillance images of constant volume, microgravity boiling dynamics over a 20-hour time period show that nucleation (bubble formation) episodes occurred in a non-periodic but non-random way. Each nucleation event originated at the heater surface and new bubble growth was accompanied by a shock wave that passed through the heat pipe and partially collapsed the original vapor bubble. The maximum heat input to the heat pipe closely followed the timing of the nucleation event. The maximum heat loss, due to thermal radiation from the walls of the device, followed the timing of bubble motion and bubble coalescence. The whole process resulted in about a 10% increase in the overall heat transfer rate. The critical size of the equilibrium, homogeneous bubble nucleus was determined using the data and standard thermodynamic descriptions of boiling to be on the order of 140 nm for a superheat of roughly 42 K. Aided by these results, researchers developed simple models to describe the effect of main bubble location on the nucleation probability in the CVB and to determine the effect of intermolecular forces on the liquid film thickness needed to support nucleate boiling.

As expected, CVB measurements indicate that heat pipe performance is enhanced in microgravity due to the increased capillary flow returning the liquid to the heater end. The heat transfer processes internal to the CVB pipes are very complex in microgravity, much more complex than originally thought or predicted by existing models. Large temperature changes along the hot-cold axis of the pipe establish surface tension driven flows (Marangoni flow) which oppose the return of the liquid to the hot end. These flows are more important in microgravity and led to the discovery of a new limit to heat pipe performance and the first ever observations of surface tension induced flooding of the heater end, a phenomenon not imagined possible in heat pipes. Contrary to expectation, the heater end of the heat pipe could not be dried out in microgravity even at heat inputs one and a half times more than those applied on Earth. The use of a loop heat pipe or multicomponent liquid mixture may overcome the issue involved with the accumulation of a thick liquid layer at the heat source. The CVB experiment also shows that Marangoni and capillary forces lead to dramatic changes in the behavior of a heat pipe as a function of its length. While flooding of the heater end and the inability to dry out the heat pipe is observed in longer heat pipes, the two forces combine to prevent start-up of the heat pipe in the shortest module. Instead, a rare phenomenon, controlled, explosive nucleation is seen.

These results, and how they relate to Marangoni and capillary forces, impact future designs of heat pipes in microscale flow boiling systems for cooling high power electronics in space and on Earth. Precise control and timing of explosive boiling has already proven its use in inkjet printer technology. This behavior can also be used to produce mechanical work such as moving micro membranes. For NASA, long-term storage of rocket propellants in space is one of the key requirements for planetary space exploration missions. Bubble formation and explosive boiling due to localized heat leaks in storage tanks under microgravity over a long period can be a serious and potentially dangerous condition for space-based fuel depots.

A heat pipe, a device used to transport heat over long distances, was operated on the International Space Station (ISS) to understand how microgravity impacted evaporation and condensation. Heat pipes were divided into three zones: the heated end, the cooled end, and an intermediate zone that formed a boundary between the two ends. Methodologically, heat was supplied to the heated end and the cooled end was kept at a constant temperature using a cold finger. A profile of liquid film thickness was also obtained using interferometry. Unlike ground experiments, which show evaporation at the heated end and condensation at the cooled end, this microgravity study showed a thicker film as heat load increased and a transition from evaporation to condensation at the heated end only – even when the surface temperature exceeded the boiling point of 160° K. In other words, there was more condensation in the pipe when the surface was superheated. These results suggest that small perturbations to the temperature in the intermediate zone of the pipe due to variations in film thickness effectively superheated the vapor and caused condensation to occur. That is, the condensation process at the heated end was initiated by thickness and temperature disturbances in the liquid film that wet the surface. The condensed liquid was driven down the main axis from the center of the heat pipe to its edges by strong Marangoni stresses (i.e., the mass transfer along an interface between two fluids) and this led to flooding of the heated end of the device. These findings further our understanding of thermodynamics in microgravity which are important for future space missions to the ISS and Mars(Kundan, 2017).