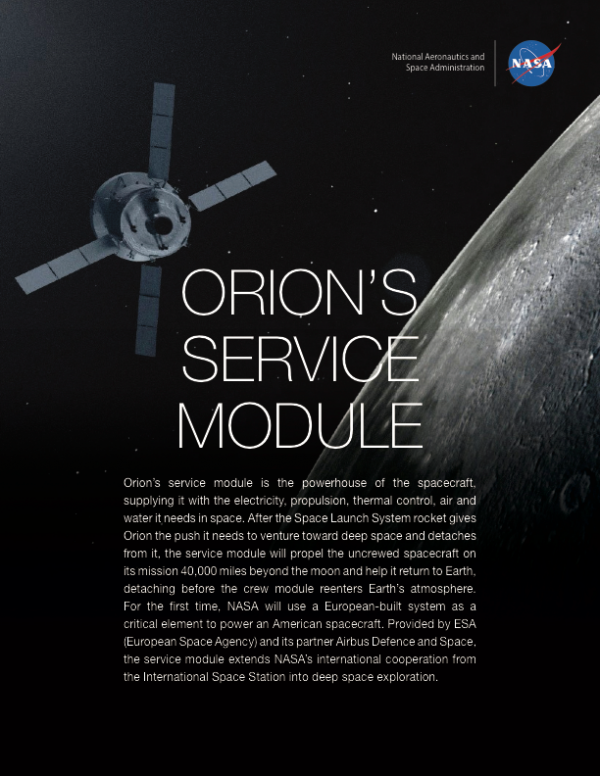 For the first time, NASA will use a European-built system as a critical element to power and propel an American spacecraft. The spacecraft’s service module is being provided by ESA (European Space Agency) and its partner Airbus Defence and Space, extending NASA’s international cooperation from the International Space Station into deep space exploration. The service module is ESA’s contribution to NASA’s Orion spacecraft that will send astronauts to the Moon and beyond.

The service module is the powerhouse of the spacecraft as it provides in-space maneuvering capability, power, and other commodities necessary for life support, including consumables for the astronauts, like water, oxygen and nitrogen. Radiators and heat exchangers keep the astronauts and equipment at a comfortable temperature, while the module’s structure is the backbone of the entire vehicle, like a car chassis. It utilizes three different types of engines push Orion to its destination and can maneuver in all directions to align the spacecraft as needed.

The cylindrical module is unpressurised and approximately three meters long, including the main engine and tanks for gas and propellant. The module weighs almost 8,000 pounds and carries almost 19,000 pounds of propellant. During launch it is held in place by the Spacecraft Adapter and is connected to the capsule where the astronauts are by the Crew Module Adapter.

The main body of the service module is around two meters tall, but its main engine, the Orbital Maneuvering System Engine, extends into the Spacecraft Adapter. Likewise, some of the equipment in ESA’s service module protrudes into the Crew Module Adapter. The spacecraft resembles ESA’s Automated Transfer Vehicle, from which it evolved. Five Automated Transfer Vehicles delivered supplies to the International Space Station and helped to keep the outpost in orbit.

The European Service Module is built by main contractor Airbus Defence and Space, with many companies all over Europe supplying components. The final product is assembled in Europe before being shipped to NASA for launch preparations.

The European-built Service Module by the Numbers

3 – The Orion spacecraft is made of three primary elements – the launch abort system, the crew module, and the service module.

11 – Number of European countries working to assemble the service module as part of an international agreement between NASA and ESA (European Space Agency). The countries include Austria, Belgium, Denmark, France, Germany, Italy, Spain, Sweden, Switzerland, The Netherlands, and the United Kingdom. 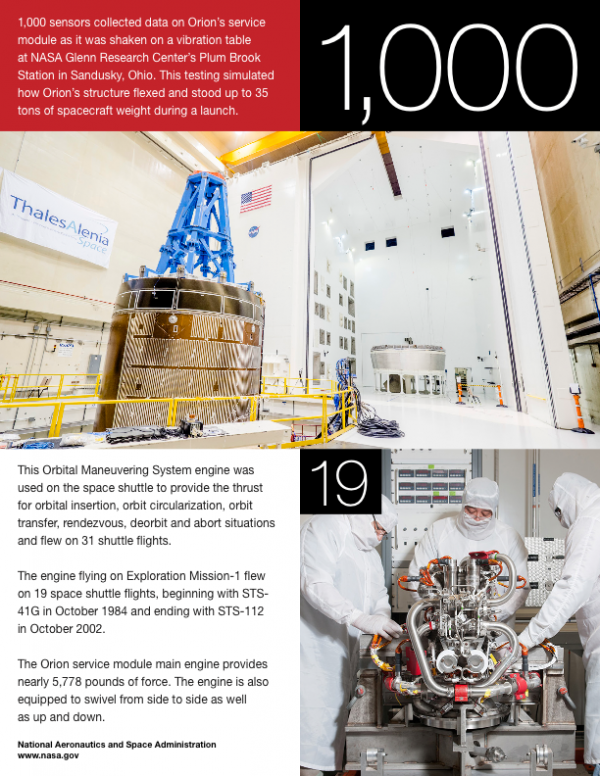 1,000 – Number of sensors used to collect data on Orion’s service module as it was shaken in the Mechanical Vibration Facility at NASA’s Neil A. Armstrong Test Facility (formerly Plum Brook Station) in Sandusky, Ohio. This testing simulated how Orion’s structure flexed and stood up to 35 tons of spacecraft weight during a launch.

6,000 – Total pounds of thrust provided by the service module’s main engine. It is also equipped to swivel from side to side as well as up and down.

15,000 – Total Number of solar cells found on each the spacecraft’s arrays used to convert light into electricity.

20,000 – The number of parts and components the service module is comprised of that must fit together perfectly and perform reliably.

Orion Test Article on the Move

Orion’s Power System To Be Put To the Test

The European-built Orion service module is progressing successfully through its campaign of testing in preparation for Exploration Mission-1 (EM-1), scheduled for 2020. Engineers and technicians at NASA’s Neil A. Armstrong Test Facility in Sandusky, Ohio, carried out an exhaustive series of tests on the service module test article throughout 2016.

The tests were done with the assistance of engineers from the European Space Agency (ESA), who are providing the service module for Orion. Major portions of that testing included the service module’s exposure to high decibel sound pressures in the Reverberant Acoustic Test Facility(RATF) chamber and vibration tests atop the Mechanical Vibration Facility (MVF). Those tests simulated the tremendous sound and vibration loads that the service module will endure during its liftoff atop the mighty Space Launch System (SLS) rocket.

November and December brought a final series of tests for the service module.

“We went into two pyro shock tests,” Carol Ginty, NASA’s Neil A. Armstrong Test Facility’s Energy Systems Test Area campaign manager, told Spaceflight Insider. “Those were conducted by Lockheed Martin (prime contractor for Orion). The first one was simulating the mechanism used to separate the fairing. We conducted that test on November 2. Two days later, we did our test on the separation of the adapter from the service module.”

“The pyrotechnics worked and it was a nominal test,” Ginty said.

Following the pyro shock tests, the stack was reconfigured to conduct a solar array deployment test. The NASA engineers and technicians at NASA’s Neil A. Armstrong Test Facility conducted the test in cooperation with test engineers from Airbus Defence and Space, the European contractor for the Orion service module. The SAW Deploy 2 test (Solar Array Wing Deploy 2 test) was the second deploy test for the Orion solar array, following a previous deploy test conducted on February 29, 2016, before the acoustic and vibration testing campaign began on the service module test article.

“We needed to see if it could survive that environment (vibration, acoustic, and pyro shock environments) and it did,” Ginty said. “Airbus was able to validate their design, and that is the design they will be using for the four arrays that will be used to power the service module for Orion.”

After the testing was completed, ESA and Airbus conducted an inspection of all their systems and subsystems. Next, a hardware acceptance review, which is part of the agreement that NASA has with ESA in their overarching implementation plan, was conducted on December 12, 2016. Through this review, the hardware was charted and turned over from Airbus to ESA, then ESA turned it over to NASA, which officially accepted the service module before turning it over to Lockheed Martin, the prime contractor for the Orion spacecraft. This was required because the next set of testing involving the service module is scheduled to take place with Lockheed Martin test engineers at Kennedy Space Center (KSC).

However, the location of that first test appears to have been changed. The first tests that were to be conducted were the Direct Field Acoustic Tests (DFAT). They were supposed to take place at KSC, but it was decided through a series of Orion boards to conduct those tests at NASA’s Neil A. Armstrong Test Facility.

“Engineers had an objection to breaking the stacked configuration to do this DFAT,” Ginty said. “They want to compare the data they get from a DFAT to the data we had from conducting it in our Reverberant Acoustic Test Chamber here. They thought there were too many variables if we broke the configuration, packed and shipped all these components to Kennedy Space Center, and reassembled there to do the test. So the Orion boards made the decision to conduct the first DFAT test here at NASA’s Neil A. Armstrong Test Facility, and that is scheduled to begin on February 1.”

“The reason you can use speakers instead of our acoustic chamber for this testis that the fairing that surrounds the service module will not be installed,” SPF Manager Rick Sorge told Spaceflight Insider. “Therefore, the attenuation that we got from outside to inside the vehicle in our acoustic chamber will not be there. The speakers won’t have to overcome that attenuation. Even though the speakers put out 143 decibels or so, that may be sufficient because the fairings aren’t attenuating the sound pressure.”

NASA’s Neil A. Armstrong Test Facility RATF chamber, with its nitrogen gas-driven horns, is capable of producing a sound pressure of 163 decibels. The test articles were shrouded by the fairings during those tests in the acoustic chamber, partially blunting the effect of the sound pressure. However, with the fairings no longer in place, the DFAT speakers hitting the exposed test articles with 143 decibels should be sufficient to provide verification testing for the DFAT testing concept.

The service module test article is scheduled to arrive at KSC after the DFAT tests and be integrated with a test version of the Orion crew capsule. They will then be flown to the Lockheed Martin facility in Denver for further testing.

A European Service Module will power NASA’s Orion spacecraft beyond the Moon and back in 2018, and now work has started on a second mission, this time to carry astronauts

Set for launch as early as 2021, this will be the first mission since 1972 to take humans out of low orbit – and European hardware will provide propulsion, electrical power, water, thermal control and atmosphere for up to four crewmembers.

ESA formalised the contract yesterday with Airbus at the Bremen, Germany, site where the first module is already being assembled.

The module extends ESA’s collaboration with NASA in human spaceflight, continuing from the International Space Station.

Exploration Mission-2 will take astronauts beyond the Moon and back, returning Orion to Earth at speeds never before experienced by humans.

Orion’s first mission will follow a similar path but without a crew, launched in late 2018 on NASA’s new Space Launch System. The month-long flight will prove the spacecraft and rocket before carrying astronauts.

Both European Service Modules are being built by companies from 11 countries led by Airbus Space and Defence, based on proven technology from ESA’s Automated Transfer Vehicle, which flew to the International Space Station five times with supplies.

As the first European Service Module for NASA’s Orion spacecraft is being assembled in Bremen, Germany, suppliers all over Europe and the United States are delivering their components that will form the chassis and supply life-support and propulsion to the Orion capsule.

Companies from 11 countries have built spacecraft-specific parts for Orion or supplied their proven space-hardware to construct the spacecraft that will fly further afar than any other human-rated spacecraft.

The prime contractor for the European Service Module is Airbus Defence and Space, a European multinational that has put its Bremen facility in charge of the service module programme. As ESA’s direct interface Airbus is responsible for the complete package, assembling the parts in its Bremen halls and verifying that the components work as expected. They are the centralised company that orders all parts for the European Service Module, keeps track of orders and ensures parts get shipped to the right place at the right time. The engines and electronics to drive the thrusters come from an Airbus subsidiary in Lampoldshausen , these are the same people that supplied the engines for ATV. The company Leoni, also based in Germany, is responsible for the network of cables for the module’s electronics – transmitting all the data from engine temperature to levels of oxygen in the tanks. 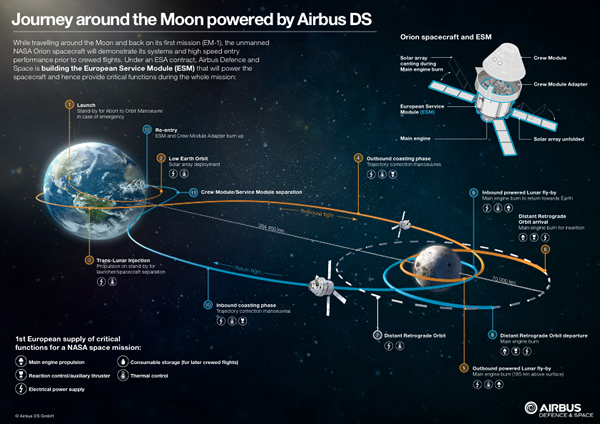 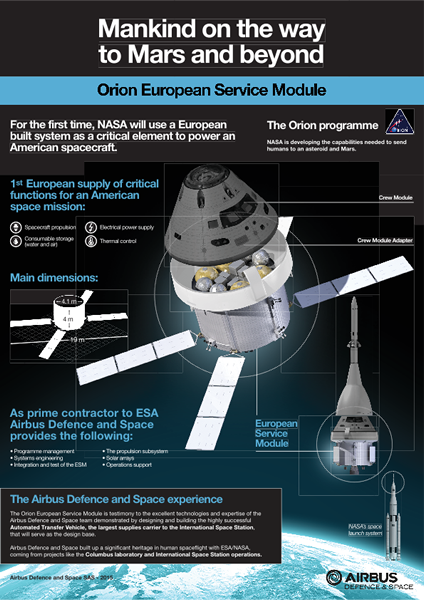