Reliable, long-life power systems are among the basic requirements of any space exploration mission. NASA has relied upon plutonium-based radioisotope power systems (RPSs) for decades for deep space missions like Pioneer, Voyager, Galileo, and Cassini, where solar power was not a feasible option. RPSs provide reliable and lightweight power for missions in the 100W(electric) to 1-kW(electric) range.

Small [1- to 10-kW (electric)–class] fission power systems (FPSs) are being developed to address a major gap in NASA’s power portfolio which could enable future flagship science missions and exploration precursor missions that may not otherwise be possible. 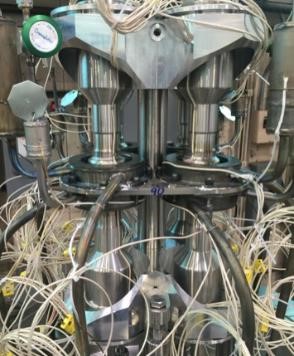 Under the Kilopower Project, the development of a FPS was centered on designing, building, and testing a working nuclear prototype. This technology could enable high power science missions or could be used to provide surface power for manned missions to the moon or Mars. The centerpiece of the Kilopower Project is the development and testing of a ground technology demonstration of a small FPS based on a 1-kW (electric) space science power requirement.

The Kilopower Project has stepped through a build-and-test sequence of phases that completed the demonstration of a flight-like system operated at prototypic conditions in a relevant environment (Technology Readiness Level 5).  This accomplishment establishes the readiness of nuclear-tested FPS technology for affordable, lightweight application to human and robotic exploration wherever it is needed.

The success of the Kilopower / KRUSTY test in 2018 has resulted in growing interest in the development of fission power systems for lunar and Mars surface power. The Fission Surface Power (FSP) Project is developing plans for a lunar fission powered Technology Demonstration Mission.