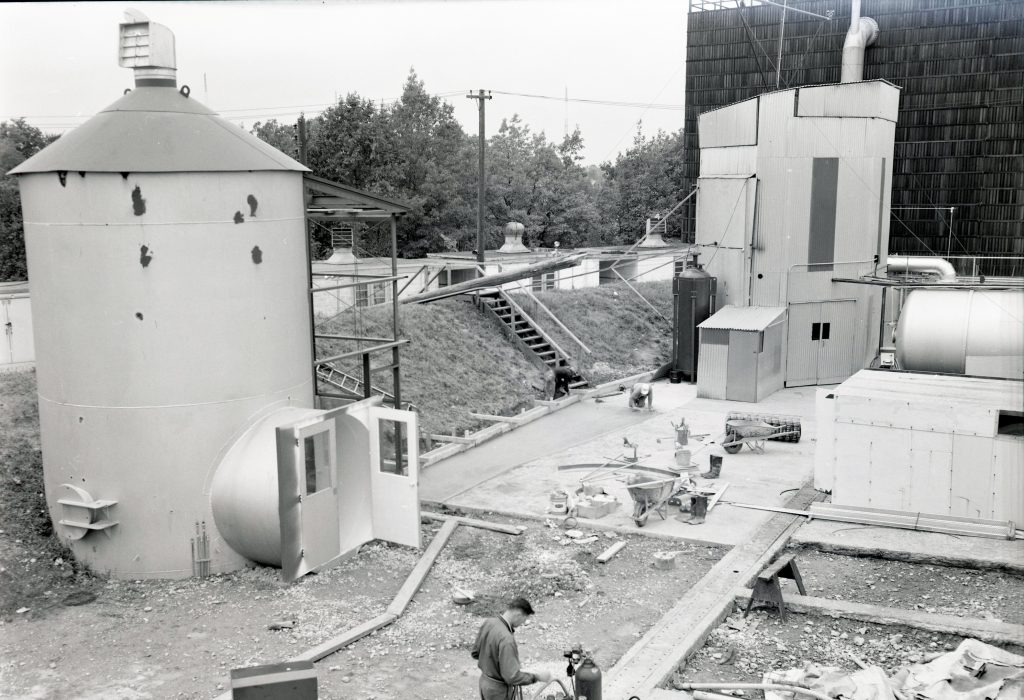 The Rocket Laboratory’s capabilities evolved over the years to support new research requirements. This evolution included the addition of several auxiliary test cells. These included Cell 31 in 1946, Cell 26 in 1959, Cell 24C in the 1970s, and the Cell 31 and 32 building in the 1990s. The new cells became key components of the Rocket Lab testing.

In the 1970s, a 9-by 13-foot test cell and small control room were created inside the Cell 24 shop area to house hydroprocessing equipment that used hydrogen to convert crude oils. In the 1980s, an Optical Instrument Laboratory with lasers was installed. Cell 24C was upgraded in the early 1990s to support testing of regenerative fuels cells. It could supply gaseous hydrogen and oxygen and deionized water to the fuel cells. In 2000, a new test stand was constructed to evaluate various multiple-cell electrolyzers for the Environmental Research Aircraft & Sensor Technology (ERAST) program.

Cell 26 (Building 35—4) was a vertical high-bay test cell located behind Cell 24. The infrastructure was built in the spring of 1959 and enclosed in early 1960. Cell 26 was used in the 1960s to study the self-pressurization of liquid hydrogen tanks and the effect of temperature increases on the flow of gaseous hydrogen.

Cell 26 was removed in the early 1970s, and a lean-to roof was built to shelter the site. A small cinder block building was built in the mid-1980s.

Cell 31 (Building 35-–19) was built to the west of the main Rocket Lab cluster in 1946. The 27- by 27-foot structure contained a small test cell that housed a rig for testing 100-pound-thrust rocket engines. Cell 31 was primarily used to test various high energy propellants with fluorine. In 1954, a large cooling tower and pump building were built on either side of Cell 31 to support the new 10-by 10-Foot Supersonic Wind Tunnel.

In the early 1960s, the building, renamed Cell 39, was reconfigured with a control room and expanded test cell area. The structure included a test rig for hydrogen tensile testing. Cell 39 was demolished in the late 1980s after many years of apparent disuse. The Cell 31 name was repurposed in the 1990s as part of the Rocket Lab’s new Rocket Combustion Diagnostics Laboratory.

Cell 32 (Building 35-–10) was a small standalone structure built near the rear of the Rocket Lab complex in 1947. The building originally served as an Explosive Storage Building before being expanded and converted into a test cell in the late 1950s. The new Cell 32 building included a square high-bay test area with a larger rectangular control room adjacent. The control room was segmented in the 1970s with half the area continuing to serve as a control room and the other as storage. Cell 32 was demolished in the mid-1980s.

In 1990, the center began construction at the Building 35—10 site of a new two-cell facility (Cells 31 and 32) that combined many of the capabilities of the existing Rocket Lab test cells with a diagnostics laboratory that used lasers for nonintrusive measurements. The new test cells were laid out similarly to Cells 12 to 24—square rooms aligned parallel with test stands capable of firing 2,000-pound-thrust gaseous hydrogen and oxygen engines firing out of roll-up doors into atmosphere. The facility has also been used with ambient liquids such as RP-1 and ethanol and soft cryogens such as methane. The laser equipment is housed in a 28-by 49-foot room immediately behind the two cells. It includes a Doppler droplet analyzer; a laser Doppler velocimeter, a copper vapor laser flow visualization system, and Raman spectroscopy.

In 2019, test capabilities of Cell 22 were incorporated into Cell 32 and and remain in use.