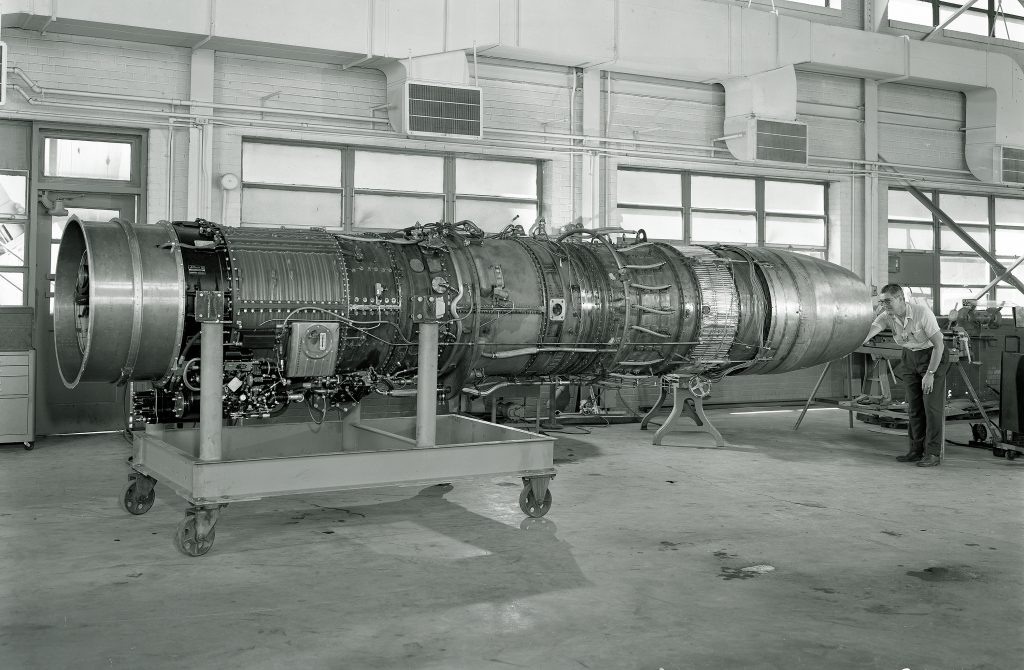 By the 1950s, jet engines were significantly outperforming their predecessors. Yet, the onset of the Cold War increased the urgency for further advances. The AWT was very active testing these new propulsion systems throughout the decade.

The performance of jet engines increased dramatically in the late 1940s and early 1950s. In 1950, Pratt & Whitney’s J-57 became the first engine to produce 10, 000 pounds of thrust. The outbreak of the Korean War in 1950, however, spurred a new push to increase engine performance. The Lewis Flight Propulsion Laboratory built the Propulsion Systems Laboratory (PSL) and upgraded the Altitude Wind Tunnel (AWT) to test these new, more powerful engines. As a result, the AWT was the laboratory’s most active facility during the early 1950s.

In 1951, the Lewis laboratory began upgrading the AWT to handle the newer, more powerful engines of the future. The most significant change was the expansion of the Exhauster Building to accommodate three new Ingersoll-Rand compressors. Other alterations included the installation of a water pump house and exhaust cooler pit underneath the tunnel and addition of two new cells to the cooling tower.

NACA engineers also replaced the tunnel’s drive fan and blades and installed a metal deck across the test section to assist engine installations.  In 1953, the make-up air system was upgraded, and in 1957 the AWT’s service air was tied into the new altitude chambers at the PSL. The modified AWT continued analyzing jet engines in the 1950s, although the engines were much larger than those studied several years before.

In the late 1940s, the Allison Engine Company created the 16-stage and 16-foot long J71 engine to succeed its TG–190 (J47). In addition to replacing the J40 engine in the F3H-2 Demon aircraft, the 10,200-pound-thrust J71 also powered the Douglas B–66B Destroyer light bomber in the late 1950s and 1960s.  At the request of the Air Force, Lewis evaluated the altitude performance of the J71–A–11 in the AWT. The tests, conducted in the fall of 1952, included studies of afterburner configurations, the engine control system, and exhaust nozzle settings.

In the fall of 1955, NACA researchers installed another J71–A–11 in the AWT for additional studies. As the Cold War intensified, the NACA examined the use of alternative aircraft fuels to increase the capabilities of current engines (see below). It was also necessary to determine the altitude limitations of traditional hydrocarbon fuels, such as the JP–4. The researchers found that the J71’s performance with JP–4 was satisfactory at 65,000 feet, but experienced significant reductions in net thrust and specific fuel consumption at 80,000 feet. They then operated the engine using gaseous hydrogen and noted that the engine performed well and more efficiently at the AWT’s maximum 89,000 feet.

Lewis researchers began studying high-energy propellants in the mid-1940s and by the early 1950s were concentrating on liquid hydrogen. The fluid’s cryogenic temperatures and high combustion rate posed technical problems, but its low weight and high energy were unrivaled. In 1955, the military asked Lewis to examine the practicality of using liquid hydrogen to fuel an aircraft. They provided the lab with a B‒57B Canberra for this project, and Lewis engineers worked to modify one of its Wright J65 engines so that it could be operated using either traditional or liquid hydrogen propellants.

In 1955, Lewis researchers conducted full-system tests of a liquid hydrogen fuel system with the J65–B–3 engine in the AWT. They checked the system, which was identical to the one intended for use on a B–57 aircraft, using both the jet fuel and hydrogen modes and successfully switched from one to the other. They found that the jet fuel performance decreased significantly over 60,000 feet, while the hydrogen operated smoothly at least 80,000 feet. They also found that the higher specific heat of hydrogen caused the turbine to produce a greater amount of thrust than obtained from jet fuel.

Lewis then flight tested the engine on the B‒57B. The aircraft took off using jet fuel and switched to liquid hydrogen while over Lake Erie. Once the hydrogen supply depleted, the pilots switched back to jet fuel for the landing. The first two attempts in December 1956 failed to make the switch to liquid hydrogen, but a third attempt in February 1957 was a successful. Several additional flights were flown in the ensuing months.

Pratt & Whitney, which had been not involved in the initial wave of jet engines, became a leader in the field during the 1950s. The company purchased the rights to the Rolls Royce Nene engine in 1948 and used it to create a series of turbojet engines, including the J–57. The J–57 was the nation’s most powerful engine at the time and the first to produce over 10,000 pounds of thrust. In late 1953, Lewis researchers used the AWT to investigate the engine’s fuel flow and the effect of inlet pressure alterations in conjunction with altitude levels. They followed up with studies of the J–57’s fuel flow characteristics and its performance with fixed-area nozzles.

J–57 derivatives also powered the first commercial jet airliners in the late 1950s, including the Boeing 707 and Douglas DC–8. There was concern regarding the impact of the noise from these jet aircraft on communities surrounding airports.  Lewis determined that the noise stemmed primarily from the mixing of hot exhaust gases with the cold atmosphere, and not from the engine itself. In 1956, they installed another J–57 in the AWT to study a wide range of noise-reducing nozzles. The nozzles lowered noise, but also reduced the engine’s thrust. Engineers designed an ejector that lowered noise levels without impeding performance. As the engine exhaust roared through the ejector, it pulled low-speed air from the ejector pump with it. This reduced the shock and resulting noise as the exhaust hit the atmosphere.