Current state of the art model for a fuel-burning engine:

Fluid cooling requires many components to pump coolant through the inverter and motor, which adds mass, power, and drag.

Rejects heat through the skin of the aircraft when air flows over the wings. Added mass is the only drawback.

Because power systems have mass and add heat, when the power system is changed to the HEATheR model, the propulsion and thermal management systems must be adapted.

Two variations of HEATheR cooling systems proved to be more efficient than a refined baseline model, which accounted for initial adjustments to the existing baseline aircraft. 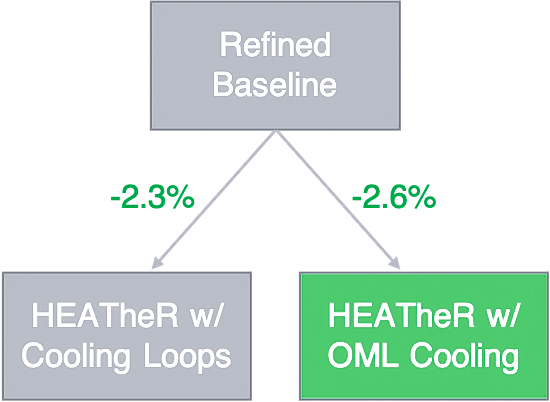 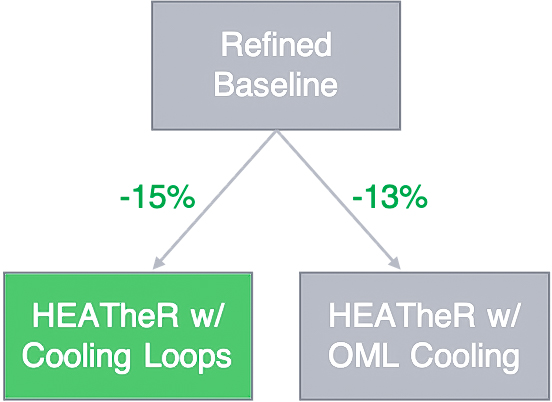 A 3% fuel reduction is a significant energy benefit, considering the flight time and number of passengers on STARC-ABL and PEGASUS. With each flight, this results in up to billions of dollars and gallons of fuel saved.

Heat rejection through an aircraft’s skin is more efficient with greater air flow. In a conventional aircraft, the wings provide some lift, so the system requires less power. But Tilt-Wing’s vertical lift property means its wings experience little airflow and its propellors do all the lift work. Thus, Tilt-Wing requires more energy overall and proved more efficient with cooling loops than with OML cooling.

Through electrifying aircraft and reducing fuel burn, carbon emissions will be significantly reduced.